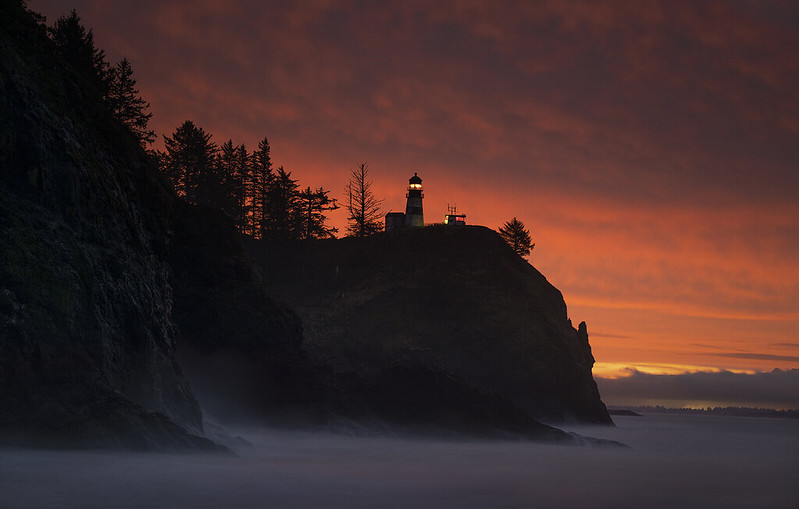 I was really looking forward to my two trips to the Northwest last December. I headed North a bit earlier than intended on December 14 as a massive storm was barreling down on California. I barely made it across the grapevine before the snow started coming down in earnest. Glancing nervously across the median, I noticed a semi which had slid nose first off the freeway into a ditch blocking all of the Southbound traffic. Grimacing, I pressed on through the rain...in my little Prius, and made it to Yosemite Valley just as the first storm broke. I spent the next day and a half shooting a very snowy Yosemite before heading North again. I couldn't take the 5 since it was blocked by snow in multiple locations North of Sacramento, so I crawled up highway 101 along the coast instead.

Skimping a bit on the sleep, I plowed straight through to Cape Disappointment and arrived shortly before sunrise on December 17. I was the only idiot in the parking lot at 6:30 AM. Even though I didn't get the waves I was hoping for, I did begin to notice a faint glow to the East and suddenly realized that I was going to get some light after all of that driving.

Ironically, I missed the dual warning to sailors between the red sky and the lighthouse and was oblivious as the clouds moved in. Not only did I spend the next 5 days without any light in the pouring rain, but I picked up the omicron on my follow up trip on Dec 26 and had to make a sudden U turn back to California after being diagnosed in Oregon.

Feeling better now, but I'm hoping that my luck improves on my next trip to the Northwest. My batting average is now about .001. In the mean time, be careful out there! My Omicron symptoms were pretty mild. Here's hoping we are all immune following the current spike and we can all get back to normal soon!

Thank you so much for your views and comments! If you have specific questions or need to get in touch with me, please be sure to send me a message via flickr mail, or feel free to contact me via one of the following: