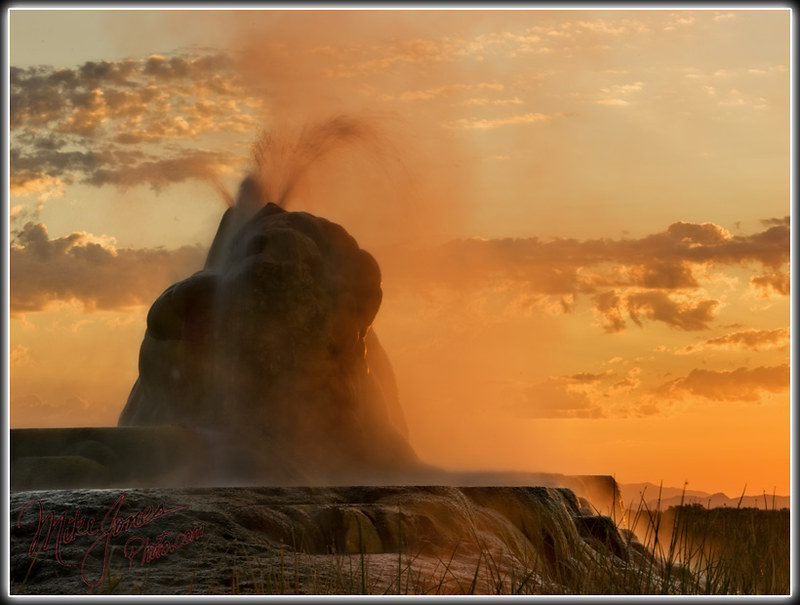 Hmmmmmm… Should I tell the story about how I got this shot? Probably not.

OK… First off. What is the "Fly Geyser"?

It's one of the most bizarre things on Earth. It's probably the worlds only man made geyser. About 50 years ago, someone was drilling a well in northern Nevada, and accidentally struck a geothermal hot spring. Suddenly boiling water started spraying out of the ground and has been ever since. It has turned into this spectacular, strangely shaped, multi colored geyser.

The funniest (and longest) was the chaybert story. This is part two of that story.

So… It is an incredible geyser, but, on private property.

Apparently, the story has changed in the past several years.

I've heard to just ask Bruno, who owns the restaurant/saloon/hotel/casono in Gerlach, and he'll say "Go ahead and shoot it"

I've heard. Just jump over the fence and shoot it.

I've heard that the property has been sold and is being made into a resort. Obviously… To cash in on the massive amounts of tourists that show up in Gerlach every year.

I've heard… "Don't go there. It's totally off limits now"

I've heard… "It's in the middle of nowhere. Your chances of being caught are zero"

I followed my GPS coordinates, so far into the middle of nowhere, that, I thought I must have missed it by a hundred miles. Then. Suddenly, in the middle of nowhere on the side of the road was a ten foot high wrought iron gate with big metal spikes on top, and about 50 "NO TRESPASSING" signs all around. On either side of the gate was about a mile of ten foot high barbed wire fence.

Sooooooo… I found a place beyond the fence where I could drive off into the desert a couple miles away, and found an inconspicuous place to sleep in the back of my truck.

If I park near the gate, and all the "NO TRESPASSING" signs and someone sees my truck there, it would be pretty obvious where I was. So. I figured that... If I don't cross the fence then I can't see the signs. And. If I can't see the signs, I couldn't possibly know that I am not supposed to be there. So… I didn't walk on the road, or climb the fence. I just walked through the desert.

I really had no idea where I was going. I just got out of my truck and started walking through the desert in the general direction of this supposed geyser, walking through knee deep shrubbery and lots of prickly things. My legs did a lot of bleeding. My favorite part was when I tried to jump over a wash and didn't quite make it. When my right foot landed, I sunk up to my knee in black gooey crud. That made the rest of the hike much more enjoyable.

Eventually, I could see steam rising up in the distance, so I headed towards that.

And then… There it was. The obscure, "Fly Geyser"

I figured… If someone asks why I am there. Just say. "I was just wandering across the desert and stumbled across this!"