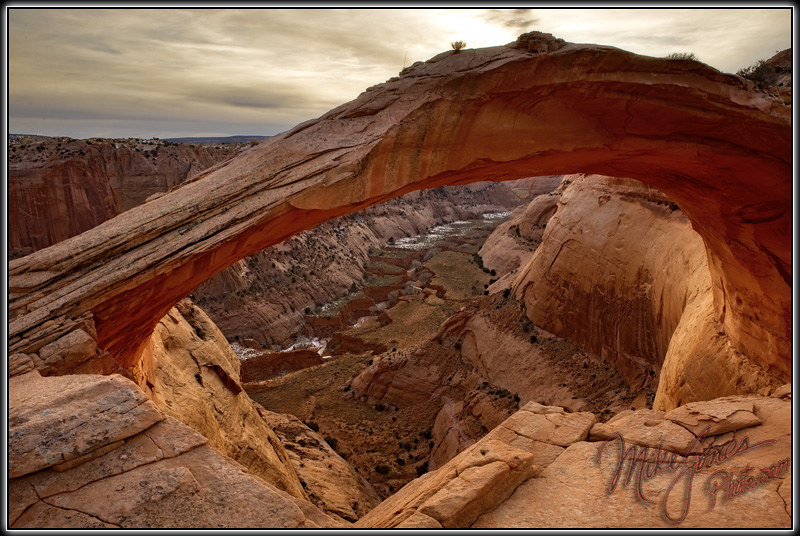 This is without question, one of the most obscure places I have ever visited. I had never even heard of this arch until a few months ago when my friend David in Texas showed me a photo he had found of it. He had no idea where it was and information on it is nearly nonexistent, but I HAD to find it. He found some info online on approximately where it was located. I don't know if it has an official name. I have also heard it called 'Thanksgiving Arch', because the light is only really nice on it the week of Thanksgiving. I did a search on flickr for both 'Eggshell Arch', and 'Thanksgiving Arch', and found NOT ONE photo of this on all of flickr! Well… Last week was Thanksgiving. I am Back in Arizona. So… I had to find it.

It's on an Indian reservation. I wasn't supposed to be there, but I snuck in.

A lot of time went into this shot. A lot of time figuring out where it was and how to get there. It's only about four miles from a paved road. But it's four miles on a maze of NASTY rough roads. Nasty is an understatement. This was some of the most hardcore 4x4 driving I have ever done, and I have lots of new scratches on my truck to show for it. Some sections of the road were soft sand, covered with ice. Some sections were really rough slick rock. Those were the good parts. The rest of the road really sucked! There were about two dozen forks in the road. A GPS doesn't really help you if you're on a tiny little dirt road that is not on any known map. So… I come to a fork in the road. I have to guess… Left, or right? If I guess wrong, it leads to either a dead end, or somebody's back yard.

It took two attempts. The first day, after an hour and a half of going round in circles on the maze of roads, I got out and tried to find it on foot. No luck. The sun set. It started to get dark. I bailed out and left. The next day, I made my second attempt. After a couple hours of bouncing around and scraping up against shrubbery, and then a short hike… SUCCESS! It was a little overcast. The light wasn't great. But... I got a shot.

So… Altogether. This shot took about 4-6 hours of research online. about 9 hours of driving (both days combined). A couple hours of hiking. And about an hour I was actually shooting.

This really was one of the most absolutely amazing things I have ever seen. This arch is easily 200-300 feet across. The drop underneath the arch is probably over 1000 feet.