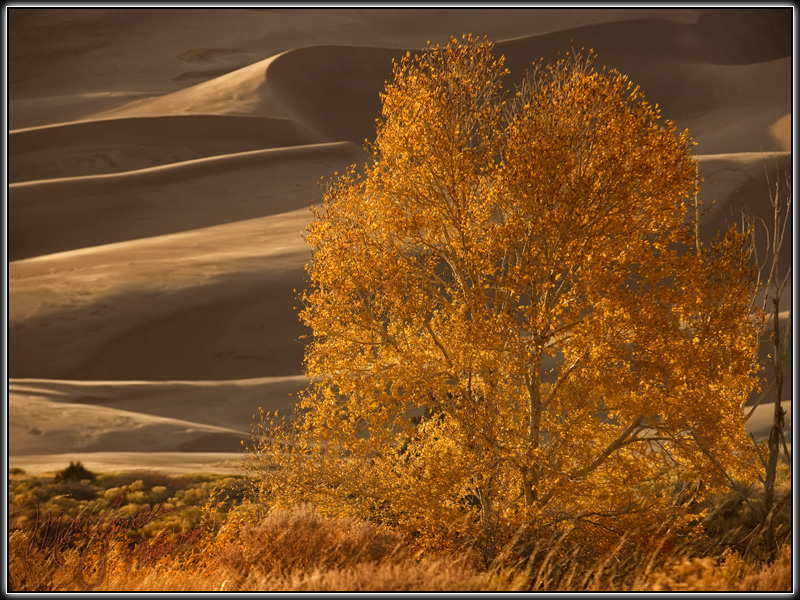 For those of you who love abstract sort of photos, here ya go. For my boss, who hates abstract photos, I posted a wider angle view down below. What is this? Is this real? You may be wondering... It's Great Sand Dunes National Park, in Colorado. Behind the tree, off in the distance are these massive sand dunes, hundreds of feet high. I spotted this yellow tree quite a ways from the road. It was the only little splash of color amongst miles of brown. So, I started walking, through lots of really sharp, prickly things until I got close enough for my shot. My legs are still sore.

I believe this is the latest park to be named a national park. I am on a quest to see every national park in the country. There are a few I'll probably never see. They're not all quite as accessible as... Let's say... Smoky Mountain's, with the Gatlinberg amusement park right in the middle of the National Park. A skyride, a Ripleys Museum. It's quite ridiculous. Yosemite is almost as bad. In Yosemite Village, I always expect Yosemite Sam to come out and start shaking hands with kids, like Mickey in Disney World. Some parks are a thousand miles from civilization or on islands that are only accessible by seaplane or boat. I have been to, I think, 36 national park's now. There are something like 55 total. I have had this argument with a lot of people. Some people have argued that there are hundreds of national parks. Well... They are 'sort of' right. There are hundreds of parks in the national park's 'system'. There are National Monuments, National Historical Sights, National Recreational Areas, National Forests... They are all part of the National Park's System. BUT. Only the best of the best are actual National Park's. And, there are only about 55 of them.

Sorry I've dropped off the planet for the past three days. I am in Taos, New Mexico, staying in the most beautiful campsite ever. It's on top of a mountain, in thick pine forest, with a beautiful stream running right outside my door. There is no one else around, BUT, I have absolutely NO cell phone service or internet. It's hard to believe that ten years ago, I had no internet. Now, I'm lost without it, I start up my computer and stare blankly at the screen and say, "ummmmmmmm... Now what?" My laptop is still broken. In order to post this (and check my email) I had to load my big iMac computer into my truck and drive down the mountain into Taos. It takes too much power to plug into the cigarette lighter, so I had to open my hood, clamp a power inverter to my battery terminals, run an extension cord around to the back of my truck and fire up the iMac. So, I'm here, sitting on my cooler, with my iMac set on the tailgate of my truck. I'm sure it's an interesting sight for people driving by.

Damn! I disappear from flickr for a few days and my funky balloon photo gets 26 THOUSAND views!!!