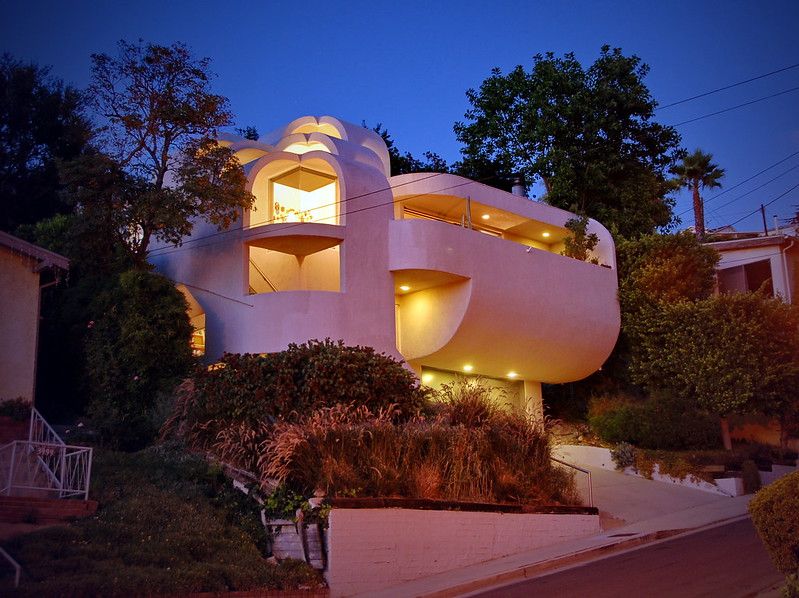 As an architecture buff, I take no small pride in knowing a thing or two about the architecture in and around Los Feliz, so it came as a great surprise when I stumbled upon the John Lautner-inspired Leiberman House on Prospect Avenue, originally designed by Glen Howard Small in 1989. Perhaps one of the least known mastermind's of contemporary architecture, the architect demonstrated early promise while an undergraduate at the University of Oregon, where he was awarded the Eliel Saarinen Scholarship for the Masters of Architecture program at the Cranbrook Academy of Arts and Institute of Sciences. After graduation (1967) he worked for various architectural firms including John Lautner and Smith and Williams. After a three year stint as assistant professor at Cal Poly Pomona School of Environmental Design, he joined a group of fellow architects to co-found the Southern California Institute of Architects (SCI-Arc) in 1972 where he taught for the next 18 years.

In the Leiberman House the original owners commissioned a creative addition to their home, described by the architect as a "a dingbat Spanish house that had no character." The resultant "face lift" consists of "a series of quarter curves in two different directions", the architect's attempt at bringing "sensuous, flowing curves to life" in a residential setting. The wall of the house have been sculpted in such a way as to eliminate the need for a roof, leaving the interiors open to the heavens and "exalted by its light." The house was purchased by Estela Mara Bensimon and Agapito Diaz in 1995. Dr. Bensimon who is co-director of the Center for Urban Education at the USC Rossier School of Education states that "when we purchased the house in 1995 from the Liebermans, the house was kind of half finished, i.e. nothing had been done beyond the living room. Over time, with the help of Los Feliz-based architect Anthony Eckelberry, we remodeled the rest of the house, tore down some walls, changed all the windows to take advantage of the openness of the design. As fate would have it, Eckelberry was a student of Glen Howard Small at SCI-Arc, so the remodel was faithful to the original vision."

Small currently lives in Managua, Nicaragua where he has recently completed three projects of national importance, the Concha Acustica, the centerpiece of the Nicaraguan national cultural plaza; the Journalist Rotunda, a monument to the journalists of the Sandinistan Revolution, and the Colon Rotunda, a fountain in the city's civic center. In 2002, Glen Small's daughter Lucia Small made an award-winning documentary film on his work, "My Father the Genius".

I missed it however the Assembly® located at 2045 S. La Cienega Boulevard presented a retrospective of Small's contribution to green architecture entitled, "Glen Small: Recovery Room," a selection of earnest architectural proposals "yet to be realized" November 9-30, 2013. In describing the exhibition Archinect's own Orhan Ayyüce writes “When he saw the Green Machine, he said, ‘we're going to build this thing.’” – Glen Small quoting Los Angeles city planner Calvin Hamilton. Oregon and Nicaragua-based architect Glen Small’s mid-career proposals still inspire radical reconsideration of our notions of environmentalism, housing, and urban development. From the 1960s-1980s, a body of visionary designs placed Small at the center of key discussions of architectural experimentation and ecological consciousness in California, and studying alongside him was an assumed part of one’s education during the founding decades of the Southern California Institute of Architecture.

Thirty-plus years later, his proposals still exist - not as suggestions for monuments, nor as paper architecture, but as thoroughly worked out architecture. Projects like Green Machine (1977-80) and Turf Town (1983) are made all the more valid and relevant by comparison with contemporary development projects. Details of a work like Biomorphic Biosphere Megastructure (1969-77) may be elegant, but these qualities are never separate from a primary function as architectural program. Glen Small, and the flickering ethos of early SCI-Arc, still represent positions that are often considered too difficult in the current state of education and emerging practices. Through original models, drawings, published material, and a series of events, Assembly® will join in the conversations Small has sustained throughout his practice".

The Leiberman House is located at 3995 Prospect Avenue in the Franklin Hills neighborhood of Los Angeles.