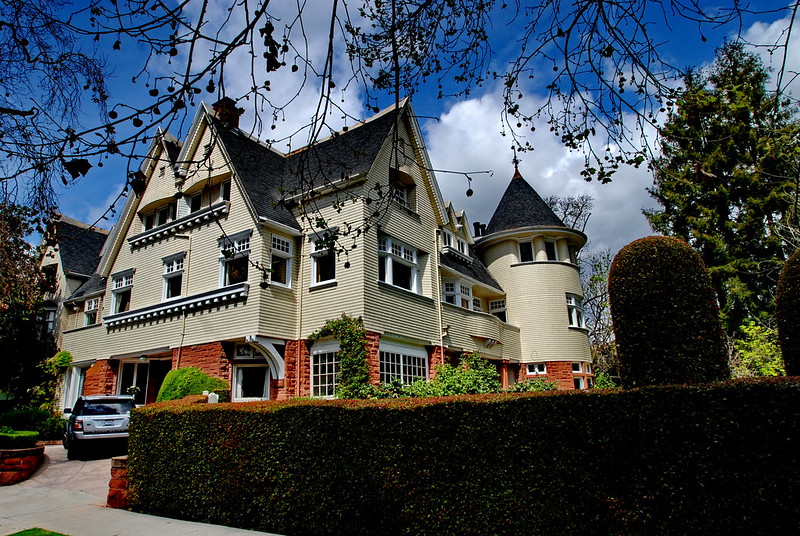 Colonial Revival Shingle Style, designed by Architect Frederick L. Roehrig in 1898 for Isaac Newton Van Nuys, a wheat farmer with enormous real estate holdings in the San Fernando Valley. The area where his farm once stood is now the thriving community of Van Nuys, named after him.

Frederick Louis Roehrig (1857 – 1948) was an early 20th-century American architect often referred to as the "Millionaire's Architect" reflecting his popularity with the upper class during his ascendancy.. A 1883 graduate of Cornell University, he also studied architecture in England. His architectural body of work followed the convention of the times producing some of the finest examples of Victorian, Craftsman, and Neo-Classical styles. His landmark buildings are generally found in Pasadena and West Adams, Los Angeles area neighborhoods favored by the well-to-do. Some of his best known works include Rindge House, a mansion for Frederick H. Rindge (1902); Ramsay-Durfee Estate (Villa Maria), a Tudor mansion with a Craftsman interior (1908) both in West Adams; Grace Mansion and Water Tower (1891); Scoville House (1909); Louise Hugus House (1908), Braun Music Center at Westridge School (1909) Finnish Folk Art Museum (1911) all in Pasadena, California.

He also designed several mansions on "Millionaire's Row" between 1892 and 1911 along South Orange Grove many of which were demolished in the 1950s and 1960s. Three of the mansions have been preserved as part of the campus of Ambassador College.