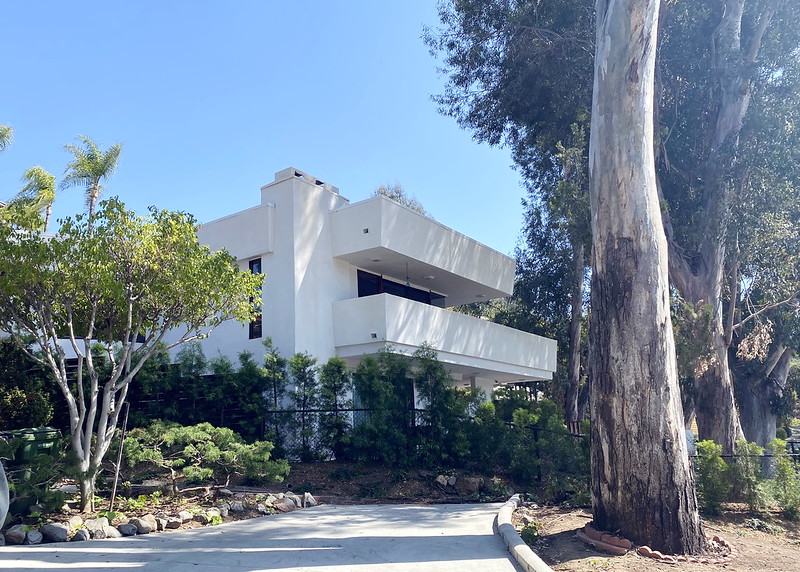 Designed by Eric Lloyd Wright, for Ruth Ross, who purchased a 1920s era Spanish style casita that stood on the lot until she had saved enough money to engage Wright to design a modernist style home for her. The idea of selecting Eric, the grandson of Frank Lloyd Wright and son of Lloyd Wright came from Anaïs Nin, the famous writer, with whom she shared a close friendship. Ross, a long time Silver Laker, went to local schools, including Thomas Starr King Middle School. She eventually got her teaching credential and returned to King to join the faculty, where she became friends with a fellow teacher, Rupert Pole, Anaïs Nin's husband. (Rupert’s mother, actress Helen Taggert had remarried Lloyd Wright after a divorce). Once Ruth became friends with Eric and his wife Mary Wright, the five of them became like family. It was Nin who suggested Eric Lloyd Wright for the design of Ruth's home. She wanted Eric to get from under his famous father's shadow and start expressing himself artistically; the Ross House was the start of all that.

Eric Lloyd Wright is founder of the Wright Way Organic Resource Center in Malibu, CA. focusing on the evolution of Organic Architecture and Green Building Design. His design philosophy is rooted in the integration of ecology, social responsibility and beauty. During Eric's early years in architecture, he was an apprentice to his grandfather, Frank Lloyd Wright and his father, Lloyd Wright. The Ross House is located at 2371 Cove Avenue in the Silver Lake neighborhood of Los Angeles.

NOTE: The ideas expressed herein are protected by copyright as part of the working draft for the new book, "Silver Lake Chronicles II: Iconoclasts, Bohemians and Visionaries of the Modern Era" and may not be reproduced in any form without written permission from the authors. Located at 2371 Cove Avenue in the Silver Lake neighborhood of Los Angeles.

Please do not use this image in any media without my permission.