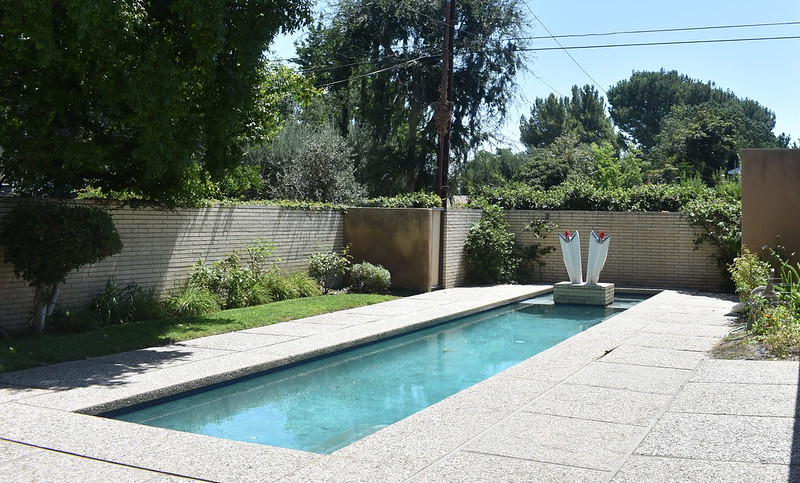 Architects Donald Hensman and Conrad Buff III designed the Modernist style house for Dr. Daniel Carlos Vandermuelen and his wife Dr. Alice J. Vandermuelen in 1965. Daniel Carlson Vandermeulen, emeritus professor of economics at the Claremont Graduate School, grew up in Buffalo, NY, where he was born on December 18. 1914. H attended Hamilton College in New York in 1932, excelling academically, earning the Chauncey S. Truax Greek Scholarship as well as the Hawley Latin Prize. Elected to Phi Beta Kappa, he was graduated with honors in 1936. He received his Ph.D. at Harvard in 1947, studying with some of the most distinguished economists of his time including Joseph Schumpeter, and one of his fellow students was the future Nobel laureate Paul A. Samuelson.

He met his future wife Alice M. John, a fellow graduate student in economics; the couple were married on September 3, 1941 in Cambridge, Massachusetts.
Alice Vandermuelen served as Assistant to the Dean at Claremont Men's College. In addition to a number of scholarly articles and book reviews, Professor Vandermeulen was the coauthor, with his wife, of National Income: Analysis by Sector Accounts (1956) and author of Linear Economic Theory (1971). Daniel C. Vandermeulen died on May 9, 2010, in his 95th year. Predeceased by his wife in 1983, he was survived by a son, David J. Vandermeulen, and two grandchildren, Laura D. and John B. Vandermeulen.

The Vandermeulen House is located at 696 West 10th Street in Claremont, California. Please do not use this image in any media without my permission. © All rights reserved.