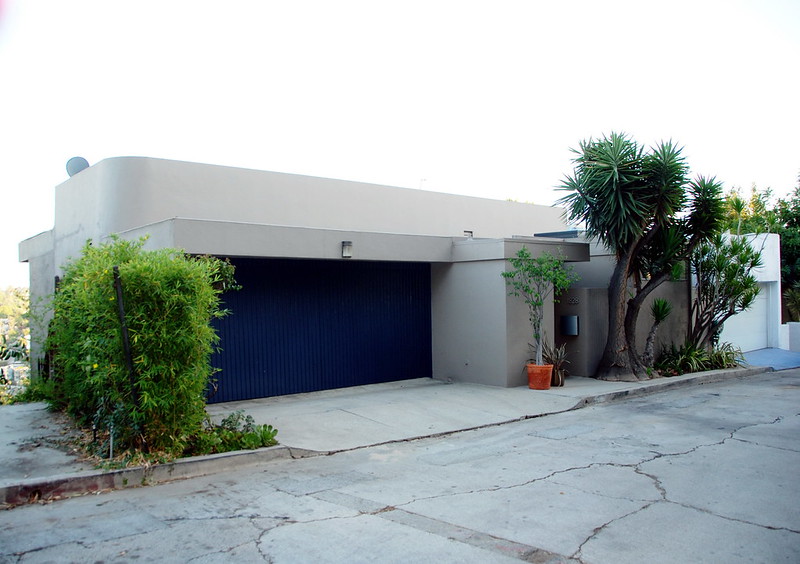 Architect Gregory Ain designed the Modernist style house for Isidor & Rosa Becker in 1939-40. Isador was born in Odessa, Russia on January 15, 1890; Rosa born born in Zembrow, Russia on February 21, 1886. They immigrated to the United States, arriving at Ellis Island on January 18, 1908. In Los Angeles they operated a hand laundry located at 230 North Larchmont Boulevard.

The Becker House marks a divergence of style for Architect Gregory Ain. Instead of the usual right angles, Ain brings a touch of the Streamline Moderne with curved walls along the upper corners and garden walls. The result is not only pleasing to the eye; it demonstrates the architect's detachment from the expression of any particular style.

According to Architect Barry Milofsky, who purchased the house in December 2003, 'the Beckers wanted a 'party house', with access to a roof deck. There was originally an open patio behind a privacy wall at the street level, and a narrow deck on the east side in back of the garage and at the lower level where the dining room was located. A dumbwaiter was installed to bring food from the kitchen at the lower level. A second owner enclosed the deck behind the garage. The third owners, Roy and Delores Dundas, purchased the house in 1960; although they would have preferred the mosque-style house next door but couldn't afford the additional $2,000 asking price,' he said.

Dundas made significant alterations, including relocating the kitchen to the enclosed patio area on the street level, maintaining a small patio off the kitchen and adding a powder room between the front door and the garage. A second bedroom was added on the lower level, and a large deck off the living room.

Architect Milofsky has built a solid reputation for restoring architecturally-significant properties under the umbrella of his firm, M2A Architects. After purchasing the home in 2003, Milofsky began the task of upgrading the out-of-date elements, exposing and refinishing the original hardwood floors, upgrading 40-year old kitchen appliances, adding lighting in the living room and deck, and removing extensive mini blinds to expose the views. In 2007, he added a large open-able skylight in the kitchen to allow light into the living room and replaced the kitchen roof to reestablish the original garage roof/fascia line in front of the house. In keeping with the Ain vernacular, he added a floating shelf in the kitchen and cabinets below the living room windows, assuming the original design. Original railings were re-created and installed as well as the original Ain color palette to the upper level.

The Becker House is located at 1828 San Jacinto Street in the Moreno Highlands neighborhood of Silver Lake. Please do not use this image in any media without my permission. © All rights reserved.