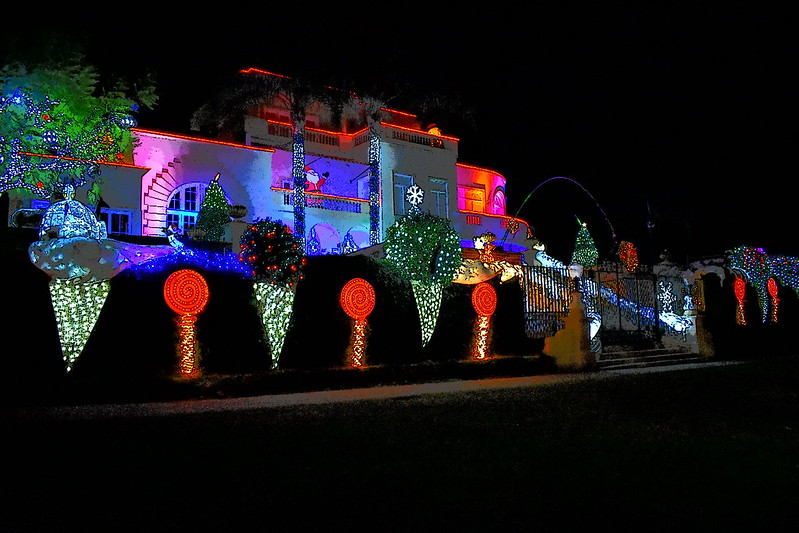 The Spanish Colonial Revival style house was originally designed by architect Jay A. Wilson for Charles F. Off and his family in 1923. Off was born in Iowa in 1868. By 1890, records show that he and Adolph Ramish of Ramish & Off were partners in the Pacific Truck Company and the Pacific Cigar Store. Off lived in the house with his wife Grace and their children, Sharon, Dulcie, Howard, Theodore and Charles, and their two grandchildren.

The house has been altered and expanded by different owners over the years. It is currently owned by Eugene La Pietra, a millionaire Hollywood discotheque owner and prominent gay activist and fund-raiser, although it appears that LaPietra is an absentee landlord. The house has some of the most extravagant Christmas decorations. Donna and I stopped by last evening on our way back from a birthday party to gaze upon its extravance. With a party in progress, we were told by security personnel at the house that, besides the dancing fountains and ice-skating rink, the party house is equipped with an ice-making machine. We witnessed a snowball fight in progress as we passed by one of the gates.

Located at 4801 Los Feliz Boulevard in the Los Feliz neighborhood of Los Angeles, California. Please do not use this image in any media without my permission. © All rights reserved.