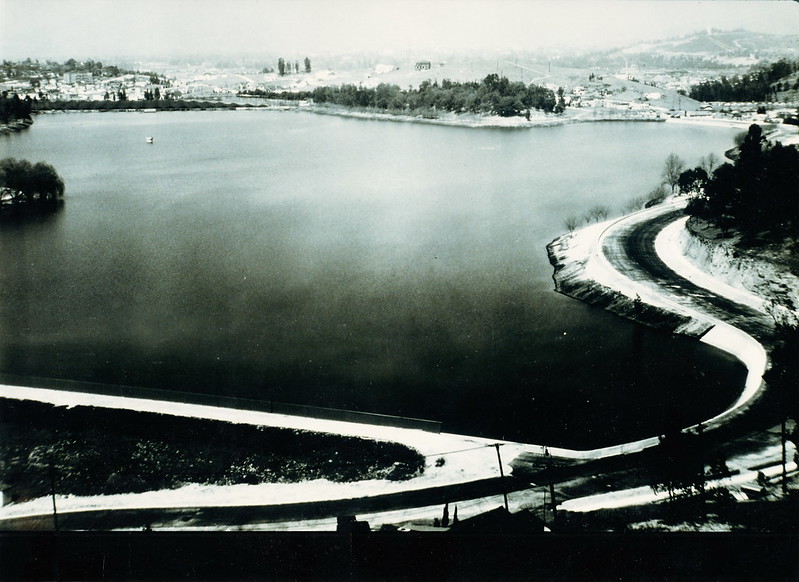 Hailed as a great feat of civil engineering at the time of its completion in 1907, the Silver Lake Reservoir Complex was built on land that the city of Los Angeles began acquiring through eminent domain in the 1880's. Chief Engineer William Mulholland utilized an innovative design (later adapted for use in building the Panama Canal) known as 'sluicing', utilizing hydraulic pumps to remove material from the lake's bottom, which was recycled to form the dam. At the time of their completion, the two reservoirs were the only drinking water storage facility west of the San Andreas Fault designed for emergency use in the event of a failure in the aqueduct system. Mulholland stocked the reservoir with Black Bass to 'keep minnows from clogging the pipes or swimming through the system into the bath. He personally chose the day each year to declare open fishing season', according to the Silver Lake Reservoirs Conservancy website, www.silverlakereservoirs.org. By 1912, the complex had been landscaped with thousands of trees by the Los Angeles Parks Commission and was a great source of civic pride.

The 127-acre site is named for Herman Silver (and not in reference to its shimmering waters), a member of Los Angeles' first Board of Water Commissioners. It is currently operated by the L.A. Department of Water & Power, with 96 acres of open water and paved roads, and 23 acres of open space, 'home' to native Angelino fauna such as coyotes, racoons, skunks and birds, including the Great Blue Heron.

In 1989, the reservoir complex was designated an Historic-Cultural Monument by the City of Los Angeles Cultural Heritage Commission (No. 422), a designation which allows for significant public scrutiny in the event of proposed changes to the site. This photo was taken from the upstairs window of the historic John R. Hunt House located at 2055 West Silver Lake Drive.