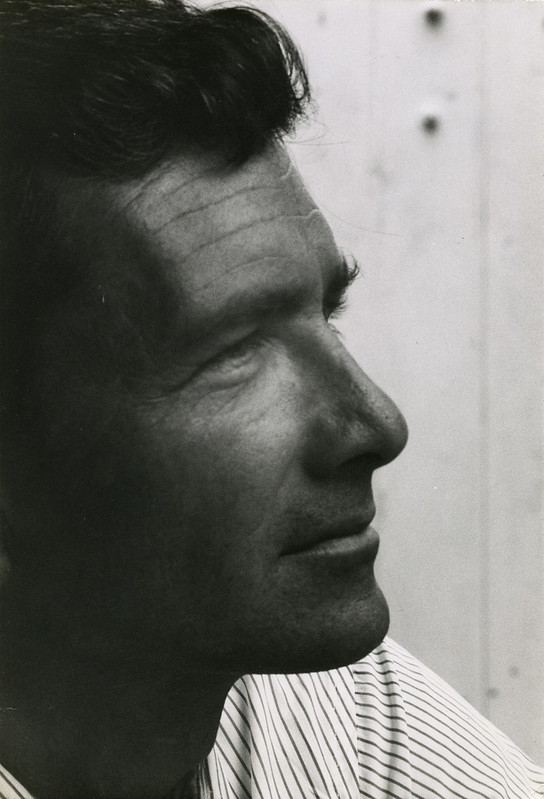 “My spiritual Son” is how Anaïs Nin referred to James Leo Herlihy, whom she met in 1947 at Black Mountain College in South Carolina, where he was a student twenty-four years her junior and she was an invited speaker. The two famed authors-to-be went on to form a lifelong personal and artistic friendship, in which one can’t help but read—given her childless “marriages” and the fraught familial relationships in much of his writing—a strong Oedipal current. When he ended up moving to a hillside home at 3527 Landa Street across Silver Lake Reservoir from hers in 1974, geographical propinquity was added to the special bond they shared.

For the openly gay, counter-cultural Herlihy, his Swish Alps-Bohemian Hill house was a far cry and welcome contrast from the working-class milieu of his Detroit, Michigan, childhood and the Catholic upbringing of his alcoholic father and overbearing mother—circumstances and character types that would figure prominently in his subsequent plays, short stories, and novels. Comparatively idyllic Silver Lake could not cure him of his chronic depression, however, which—exacerbated by Nin’s death in 1977, the falling away of friends from AIDS in the 1980s, and the death from cancer of his partner James Kirkwood in 1989—eventually drove him to take his own life, at age sixty-six, from an overdose of sleeping pills in 1993.

Unlike Nin, who kept writing, despite her terminal cancer, to the bitter end, Herlihy had all but ceased writing by the early 1970s. Three short plays, collectively (and tellingly) titled Stop, You’re Killing Me, were published in 1970; his last novel, The Season of the Witch, came out one year later. Far from becoming a recluse, however, he corresponded avidly; remained active in the peace and gay rights movements; traveled extensively to Europe, North Africa, and South America; taught writing for two years at City College, New York; and enjoyed socializing, as long as they lasted, with literary friends such as Nin, Tennessee Williams, and Christopher Isherwood. As one of his correspondents, friend and photographer Lyle Bonge, related: “Even though he gave up writing—he was still a letter writer. It was all very personal and intimate. About sex and death but also about his joys . . . on working on his garden, on cooking, with often a whole page devoted to a supper he had had the night before; how he had fixed the meal; something new he had learnt.”

Herlihy hinted at two possible reasons for the abandonment of his literary career: the smash critical and financial success of the Hollywood film adaptation of his 1965 novel Midnight Cowboy; and an early conversation with his dear friend and muse Anais Nin. Shortly after Midnight Cowboy won the Academy Award for Best Picture of 1969, Herlihy complained in a letter to friend and poet M. C. Richards: “Midnight Cowboy has made me too well known for my own comfort and has put some things off balance. I’m not writing well and that hurts my vanity. . . . I do hope and pray that after this book [The Season of the Witch] I will be delivered forever from the horrors of fiction writing.”

The conversation with Nin, during their time together at Black Mountain College, revolved around what they each hoped to achieve with their writing. Herlihy said his main aim was to improve the world through socially conscious novels like those of Upton Sinclair. Hers (cited in a different context in Chapter One), was “to contribute to the world one fulfilled person—myself.” “And that was the beginning,” he later recalled, “of—for me—a life-long double-mindedness. There was this part of me that wanted to do something for the world and part of me that wanted to understand what it meant to be a fulfilled individual.” Most of all, he learned from Nin, “If you want to affect the world, first of all you have to affect yourself.”
The “double-mindedness” admission is telling, as it underscores a key difference between Herlihy and Nin. For the more spiritually than socially minded Nin, there was no dichotomy between writing and self-fulfillment. To the contrary, the two aspirations were of a piece, and the adulation her writing produced, especially the diaries, only further validated their commensurability. For Herlihy, the reconciliation of art and life was one he strove mightily to achieve, obviously with mixed results.

Herlihy’s first serious writing was for the stage, which emerged organically from his stint as an actor with the Pasadena Playhouse from 1948 to 1950. His second play, Streetlight Sonata: A Modern Tragedy, was performed at the Playhouse in 1950, and the next, Moon in Capricorn, premiered at the Theatre de Lys in New York in 1953. Nin facilitated Herlihy’s artistic growth when she observed in his writing, and urged him to further develop, a transcendence of “direct action [through] the equivalent of jazz . . . [its] rhythm and flashes of insight.” His more self-consciously adopting a “jazzy” approach in a subsequent short story, “The Sleep of Baby Filbertson” (1953), paid off; the story was picked up by Paris Review in 1953 and “marked the beginning of his career as a published writer.” Another short story, “Jazz of Angels” (1953), was loosely adapted into an experimental film by Ian Hugo, the filmmaker pseudonym of Nin’s husband Hugo Geiler.

A fellowship with the Yale Drama School in 1956, combined with hard knocks on a series of dead-end jobs, furthered the merging of Herlihy’s background, life experience and social conscience in two new Broadway plays: Crazy October: A Comedy (1958), starring Tallulah Bankhead, and especially Blue Denim (also 1958). The latter not only became Herlihy’s first commercial success but, though not a box-office hit, was adapted for the big screen in 1959, with screenplay and direction by Philip Dunne and a top-flight cast including Carol Lynley, Brandon De Wilde, and MacDonald Carey.

While Blue Denim owed much to the “southern gothic” of writers Carson McCullers, Flannery O’Connor and Tennessee Williams, and to ‘50s teen-angst movies such as The Wild One (1953) and Rebel Without a Cause (1955), it uniquely reflected the “lives of quiet desperation” of the “tranquilized 50s” (the play was originally titled Sleepwalker’s Children) and was, in what would become a pattern, distinctly semi-autobiographical. In this and succeeding work, Herlihy transmuted his dysfunctional family, struggles with sexual identity, and peripatetic meanderings (Nin called him a “chronic hitchhiker”) into lonesome, alienated, restless misfits seeking to escape “the decay of the suburban family,” the clutches of booze-ridden fathers and smothering mothers, and the overall oppressiveness of American society. A tortured gay subtext increasingly permeated his writing (“a semi-hidden homosexual world of young men” who seemed “to be suffering some nameless common loss.”). But the work also began suggesting that the protagonists’ psychological damage wasn’t necessarily a dead-end street but offered at least the possibility of a “pilgrimage of self-discovery” and “a deeper reconnection with the world.”

Suicide also lingered as a motif in Herlihy’s first two novels. Teenaged Cliff’s mock suicide note and his secret, much older love Echo’s actual self-propelled death in a car crash punctuate the first novel, All Fall Down (1960), which became his second Hollywood movie in 1962 (directed by John Frankenheimer and starring Warren Beatty, Brandon De Wilde, Angela Lansbury, Karl Malden and Eva Marie Saint). Cliff’s older brother Berry-Berry’s declamation, “I hate life!” (Berry-Berry itself a homonym for “bury-bury”) also rhymes with Midnight Cowboy’s lonely eccentric Townsend Locke’s motto, “I loathe life, I loathe every minute of it!” But just as Cliff’s life-affirming “I love life!” at the end of All Fall Down suggests the titular “All” is overstated, protagonist Joe Buck’s bus ride from New York City to Florida at the end of Midnight Cowboy, burdened with the sickly, crippled Ratso Rizzo but also with a newfound, other-directed, represents “death at the same time as it symbolizes the promise of a new life.”

Joe Buck’s move to Florida mirrored Herlihy’s own odyssey from New York to Key West in the mid-1950s. And in its fusing of psychological alienation and the social inequality of America’s big cities, the novel nudged the author closer to the resolution of his double-sidedness. Indeed, in his “personal engagement with his subject” and the emotional plumbing of past experience, Herlihy matured, with Midnight Cowboy, into what I call (in a nod to the Stanislavsky technique he surely encountered in his acting/playwriting days) a “Method writer.” The preparation he undertook for his next novel, The Season of the Witch (the title an homage to Donovan’s 1966 song “Season of the Witch”), reinforces this notion.

Bent on reflecting the social and spiritual upheaval of the 60s in which he avidly participated, Herlihy set out with his friend Evan Rhodes on a cross-country hitchhiking trip “to document the new phenomenon.” Caught up in the flower-child optimism and consciousness-raising of the period, Herlihy “felt reborn and invigorated” by what he observed and directly experienced, including group meditation and anti-war protests. The conjoining of his personal experience with the counter-cultural current resulted, for literary critic Robert Ward, in “an autobiographical fragment” that marked “his growth as a political writer.”

The journey of reinvention for Season of the Witch’s protagonist Gloria Random can be taken as an allegory for “the genesis of a golden age.” As another character in the novel, aptly named Peter Friedman, described the process: “We’ll learn to be aware, we’ll learn to watch ourselves in such a way that when the ghosts of our parents show themselves in our behavior, we’ll be free to pick what’s life-affirming, and simply reject what’s ugly and dark.”

By the early-to-mid-1970s, for Herlihy, such rejection included “the horrors of fiction writing.” He turned instead, at least for a time in his Silver Lake abode across from Anaïs Nin’s, to becoming what she had called “a self-fulfilled person.” He accomplished the feat on his own terms, with “cooking, teaching, and gardening” becoming “extensions of his creativity, not an end to it.” And while his approach clearly differed from Nin’s, she acknowledged his success by noting, upon visits to his house in the mid-1970s, that it “fused with fantasy and beauty” and that “he was happy.”

Though not for long. Not entirely giving up writing, he worked on abortive projects including a historical novel of the Midwest and a biography of eccentric artist Henry Faulkner. He also had a bit part in the film Four Friends (1981), a film aptly about the ups and downs of the ‘60s and ‘70s, directed by his Black Mountain College classmate, Arthur Penn. Despite his sharing in the disillusionment that followed that idealistic epoch, and unlike many who deserted their counter-cultural ideals in its wake, Herlihy, in perhaps the most meaningful expression of his “self-fulfillment,” remained devoted to “the misfit types who peopled his novels and plays.” As friend Lyle Bonge recalled, “He often filled his home with them and protected them from the police. The total over the years probably numbered over a hundred. After his death a young man huddled all night on the curb in front of his house.”