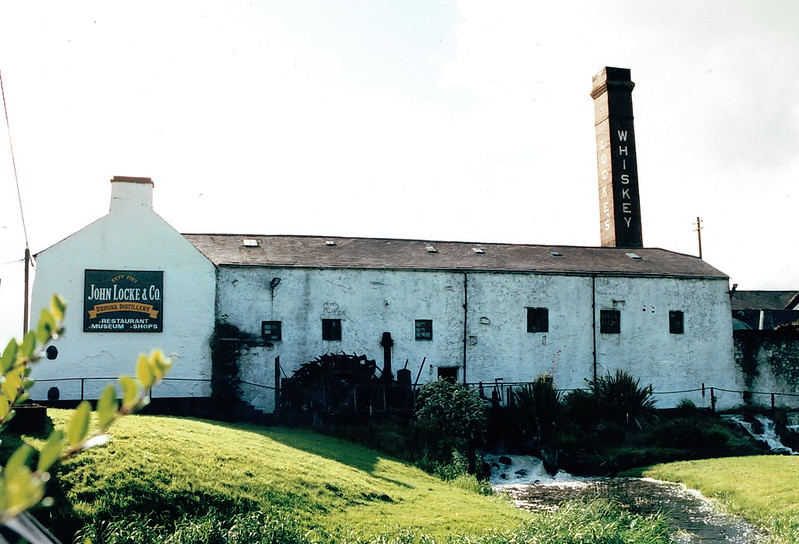 One of our great "discoveries" in visiting Ireland for the first time in June 2002 was stumbling into the John Locke & Co. Distillery, situated along the road and on the River Brosna in Kilbeggan, County Westmeath, Ireland. Being that the distillery is(or was) called "John Locke & Sons", and given our Irish ancestry, I was convinced their must be some familial connection.

The distillery was founded in 1757 and, by 1798, was in the hands of Matthias McManus, whose son was executed in Mullingar due to the part he played in the United Irishmen rebellion of that year.

John Locke took over the distillery in 1843, and it passed down to his granddaughters Mary Evelyn and Florence Emily in 1943. The economic depression of the 1920s and 1930s took its toll on Locke's. In 1947 it was put up for sale and the successful bidder, the Transworld Trust, involved fraudsters from Switzerland and Austria. Oliver J. Flanagan alleged under Oireachtas privilege that Fianna Fáil politicians were linked to the deal; a tribunal of inquiry discounted the allegations but the damage contributed to Fianna Fáil's defeat in the 1948 election.

On 19 March 1954 production ceased at the distillery. It closed closing completely in 1957 and the building began to fall into disrepair. Twenty five years after its closure, the community of Kilbeggan restored the distillery and opened it to the public as a whiskey distillery museum. Cooley Distillery bought the license to produce Kilbeggan and Lockes Whiskey, and later took over the museum along with opening a new working distillery in Kilbeggan.

The distillery ooks pretty much the way it did when it closed its doors close to a century ago. The water wheel outside, dipping its planks into the Brosna River, drives huge iron cogs inside. Giant leather belts whir overhead and garganutuan pistons flex and pump; a “modernised” hydrolic engine installed in the late 19th century is still there, provided in case the river froze or ebbed too low to drive the necessary automation.There are huge millstones for grinding; you can try your hand at turning to see how heavy they are.