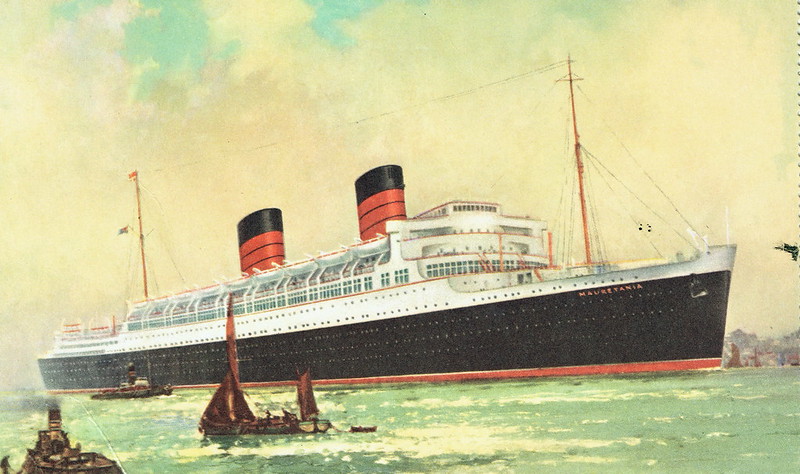 RMS Mauretania was the second ocean liner named Mauretania. She was the first ship built for the newly formed Cunard White Star company following the merger in April 1934 of the Cunard and White Star lines. She was the largest ship built in England at the time and was the largest vessel ever to navigate the River Thames. Mauretania sailed on her maiden voyage from Liverpool to New York on 17 June 1939. Mauretania was to experience only the briefest period of commercial operation before the outbreak of hostilities that brought Great Britain into the Second World War. On 11 August 1939 she left on her final prewar voyage to New York. On her return she was requisitioned by the government and armed with two 6-inch (150 mm) guns and some smaller weapons, painted in battle grey, and then despatched to America at the end of December 1939.

For three months the ship lay idle in New York, docked alongside the Queen Elizabeth, Queen Mary, and the French Line's Normandie, until it was decided to use her as a troopship. On 20 March 1940 she sailed from New York to Sydney, via Panama, to be converted for her new role. She had an exciting voyage out to Australia via Bilbao, San Francisco and Honolulu, tracked for much of the way by the enemy and having to evade concentrations of U-boats that were known to be lying in wait for her. This conversion work was carried out in April and in May she left Sydney as part of one of the greatest convoys ever mustered for the transport of troops. With her were Queen Mary, Queen Elizabeth, and Aquitania, with 2,000 troops, bound for the River Clyde via South Africa.

On 2 September 1946 she returned to Liverpool, was released from Government service and immediately went into Gladstone Dock to be reconditioned by Cammell Laird & Co. for return to Cunard White Star service. After a complete overhaul and refurbishment of the interior, Mauretania made her first post-war Atlantic crossing to New York, departing on 26 April 1947. After using Liverpool as her home port for the first two voyages she was thereafter based at Southampton. By 1962, however, she was facing competition from much more modern ships and was beginning to lose money for Cunard Line; by 1964 she was mainly employed cruising from New York to the West Indies. Her final voyage was a Mediterranean cruise which left New York on 15 September 1965.