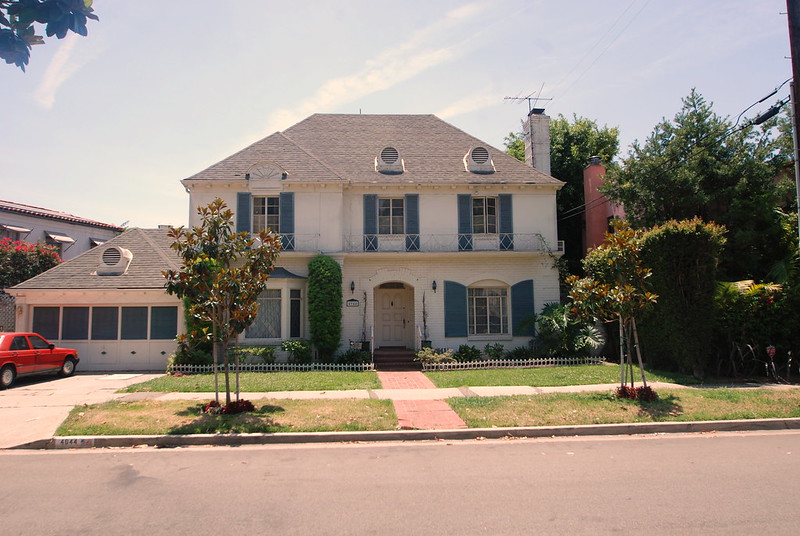 Architect Max C. Drebin designed the Colonial Revival style house for Barney Morris (1909-1985) and his wife Estelle in 1941. Census records indicate that Morris was born in England on October 6, 1909. He served as treasurer or bookkeeper at a furniture manufacturing company and died in Beverly Hills on March 11, 1985. The house is located at 4944 Finley Avenue in the Los Feliz neighborhood of Los Angeles, California.

On Saturday, May 17, 2014 my wife Donna and i went on one of the historic walking tours of our neighborhood, the former Arthur Letts Estate, sponsored by the Los Feliz Improvement Association ILFIA). Our docent was Los Feliz historian Donald Seligman who enlightened us along the way.

Arthur Letts was born on the family estate in Holdenby, England in 1862, He ran away to America with a younger brother when he was twenty. His parents didn't know the reason for his absence until after he boarded a Liverpool steamship bound for Canada. He arrived in Los Angeles at an opportune time, purchasing the Broadway Department Store at the moment it declared bankruptcy. He was successful from the start. In 1904, he purchased 70 acres from Griffith J. Griffith and proceeded to build his estate, which he completed in 1907. The house was named "Holmby House", described as an "immense country place with sunken gardens" and was considered to have one of the largest and most elaborate gardens in the city. Letts also founded Bullocks Department store for more upscale merchandise.

Letts was a powerful real estate magnate as well. In 1919 he purchased the 3200 acre Wolfskill Ranch in Westwood and later laid out the town. He was instrumental in the founding of the University of California at Los Angeles.

Letts passed away in 1923. After his death the estate was divided into building plots and then resold. The homes represented here form part of the subdivided estate.