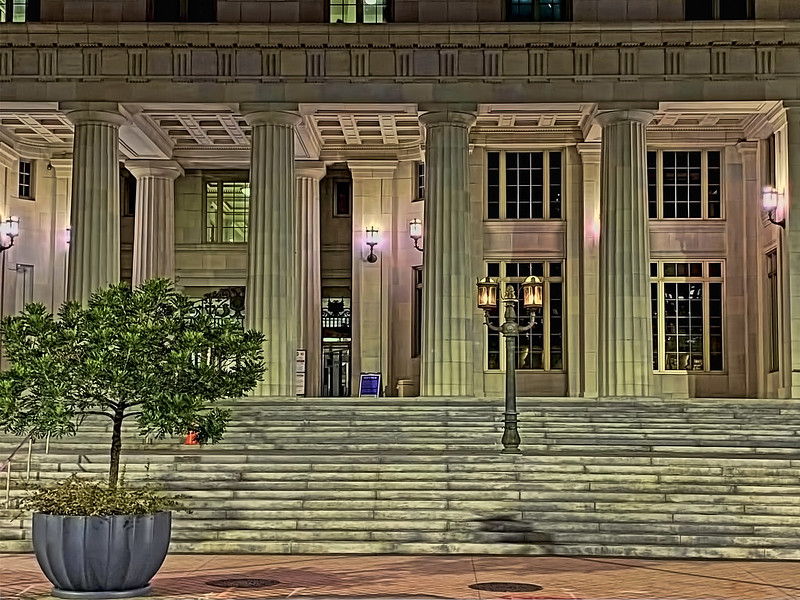 For many years, the Miami-Dade County Courthouse, at an elevation of 360 feet, was reputed to be the tallest building south of Baltimore.

It was the County's first high-rise and is in the National Register of Historic Places. Efforts to refurbish this magnificent structure and restore it to its original grandeur have been underway since 1981 by Architect James W. Piersol, AIA of M.C Harry Associates Architects of Miami.

The restoration and renovations initially stabilized the terra cotta facade and installed new life safety systems. In 1982, the idea of restoring the lobby to its original distinction was the passion of both Architect James Piersol and engineer Don Youatt, of the Miami-Dade Planning and Development Department. With a little less than half of the funding necessary for the lobby restoration project in hand ($300,000 grant approved by the Legislature in 1996), the Dade County Bar Association acted as the fund-raising umbrella and initiate a drive to raise the remainder needed from lawyers and the general public. A few years later, the same team restored Courtroom 6-1, which had been the site of many infamous trials over the years.

Today, the Miami-Dade County Courthouse provides offices, chambers, and courtrooms for the clerks and judiciary assigned to both the Circuit and County Civil Court and the Family Court.

When county government was established following the Civil War, public records were so sparse they could be carried in a carpetbag and most probably were. Therefore, the "courthouse" was wherever the county's chief office holder decided to do business.

In 1890, Dade County's first courthouse stood in the town of Juno, Florida some ten miles north of West Palm Beach. At that time, Dade County covered more territory than it does today, stretching from Bahia Honda Key, in the middle Keys, up to the St. Lucie River, near present-day Port St. Lucie.
Juno was chosen as the "county seat" because of its strategic location at the southern terminus of the Jupiter-Juno railroad. Juno also held the northern terminus of the boat and connecting the stagecoach line to Miami. The courthouse remained in Juno (now no longer in existence) until 1899 when it was moved to Miami down the inland waterway on a barge and was placed on the banks of the Miami River, east of the old Miami Avenue bridge.

The building was two-story wooden frame construction, housing offices and jail cells on the ground floor and a courtroom on the second floor. It has a Neoclassical design, in 1904 this building was replaced by a new courthouse building situated on Flagler Street (then known as Twelfth Street). It was a magnificent building constructed of limestone, having an elegant red-domed top, at the cost of $47,000. It was anticipated that this courthouse would serve the city for at least fifty years; however, no one was prepared for the rapid growth Miami experienced during this period, and by 1924, only twenty years later, there was serious talk of the need for a larger courthouse.

In the early 1920s, architect A. Ten Eyck Brown entered a design competition for Atlanta City Hall, which was rejected. He then made the plans available to Dade County, and City and County officials readily approved them. It was decided by the officials to build the new courthouse at the same location as the existing one on Flagler Street. Construction began in 1925, with workers erecting the new building around the existing structure, which was then dismantled. Community leaders and citizens alike voiced excitement over the new 28 stories "skyscraper" that would soon dominate the skyline.
Unexpectedly, construction was halted when the building reached ten stories. It was discovered that the "high-rise" was sinking into the spongy ground. Engineers consulted with an architect from Mexico City, who had encountered a similar problem while building the city's opera house. The consultant determined that the foundation pilings were not set deep enough. To correct the problem, cement supports were poured, which take up much of the space in the building's basement file room even to this day.

The courthouse was finally completed in 1928 at the cost of $4 million (USD 2013 $54.5 million). Initially, it served as both the Dade County Courthouse and the Miami City Hall. Jail cells occupied the top nine floors because these heights offered "maximum security" and were considered escape-proof. In 1934, a prisoner housed on the twenty-first floor picked the lock of his jail cell window and used a fire hose to lower himself to freedom. In the years following, more than 70 prisoners escaped from this so-called "secure" prison.

Credit for the data above is given to the following websites:
en.wikipedia.org/wiki/Miami-Dade_County_Courthouse
www.emporis.com/buildings/122294/miami-dade-county-courth...