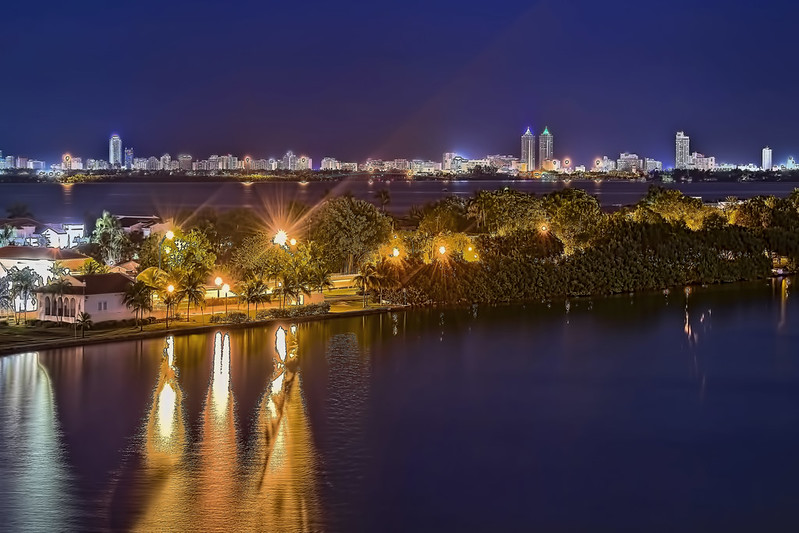 Biscayne Island is a neighborhood in the City of Miami, Florida, United States. It is also the westernmost of the Venetian Islands, a chain of artificial islands in Biscayne Bay. During the 1930s, the island was used as an airport known as Viking Airport, with a hangar, 2,600' sod runway, and seaplane ramps; the airport was closed by 1937 and residential development began in the 1940s. The island is now home to apartment buildings, residential neighborhoods, and a toll plaza portion of the Venetian Causeway.

Miami Beach is a coastal resort city in Miami-Dade County, Florida, United States. It was incorporated on March 26, 1915. The municipality is located on natural and man-made barrier islands between the Atlantic Ocean and Biscayne Bay, the latter of which separates the Beach from the mainland city of Miami. The neighborhood of South Beach, comprising the southernmost 2.5 square miles (6.5 km2) of Miami Beach, along with downtown Miami and the Port of Miami, collectively form the commercial center of South Florida. Miami Beach's estimated population is 92,307 according to the most recent United States census estimates. Miami Beach is the 26th largest city in Florida based on official 2017 estimates from the US Census Bureau. It has been one of America's pre-eminent beach resorts since the early 20th century.

In 1979, Miami Beach's Art Deco Historic District was listed on the National Register of Historic Places. The Art Deco District is the largest collection of Art Deco architecture in the world and comprises hundreds of hotels, apartments, and other structures erected between 1923 and 1943. Mediterranean, Streamline Moderne, and Art Deco are all represented in the District. The Historic District is bounded by the Atlantic Ocean on the East, Lenox Court on the West, 6th Street on the South, and Dade Boulevard along the Collins Canal to the North. The movement to preserve the Art Deco District's architectural heritage was led by former interior designer Barbara Baer Capitman, who now has a street in the District named in her honor.

In 1870, a father and son, Henry and Charles Lum purchased the land for 75 cents an acre. The first structure to be built on this uninhabited oceanfront was the Biscayne House of Refuge, constructed in 1876 by the United States Life-Saving Service at approximately 72nd Street. Its purpose was to provide food, water, and a return to civilization for people who were shipwrecked. The next step in the development of the future Miami Beach was the planting of a coconut plantation along the shore in the 1880s by New Jersey entrepreneurs Ezra Osborn and Elnathan Field, but this was a failed venture. One of the investors in the project was agriculturist John S. Collins, who achieved success by buying out other partners and planting different crops, notably avocados, on the land that would later become Miami Beach. Meanwhile, across Biscayne Bay, the City of Miami was established in 1896 with the arrival of the railroad and developed further as a port when the shipping channel of Government Cut was created in 1905, cutting off Fisher Island from the south end of the Miami Beach peninsula.

Collins' family members saw the potential in developing the beach as a resort. This effort got underway in the early years of the 20th century by the Collins/Pancoast family, the Lummus brothers (bankers from Miami), and Indianapolis entrepreneur Carl G. Fisher. Until then, the beach here was only the destination for day trips by ferry from Miami, across the bay. By 1912, Collins and Pancoast were working together to clear the land, plant crops, supervise the construction of canals to get their avocado crop to market, and set up the Miami Beach Improvement Company. There were bathhouses and food stands, but no hotel until Brown's Hotel was built in 1915 (still standing, at 112 Ocean Drive). Much of the interior landmass at that time was a tangled jungle of mangroves. Clearing it, deepening the channels and water bodies, and eliminating native growth almost everywhere in favor of landfills for development, was expensive. Once a 1600-acre, jungle-matted sand bar three miles out in the Atlantic, it grew to 2,800 acres when dredging and filling operations were completed.

With loans from the Lummus brothers, Collins had begun work on a 2½-mile-long wooden bridge, the world's longest wooden bridge at the time, to connect the island to the mainland. When funds ran dry and construction work stalled, Indianapolis millionaire and recent Miami transplant Fisher intervened, providing the financing needed to complete the bridge the following year in return for a land swap deal. That transaction kicked off the island's first real estate boom. Fisher helped by organizing an annual speed boat regatta, and by promoting Miami Beach as an Atlantic City-style playground and winter retreat for the wealthy. By 1915, Lummus, Collins, Pancoast, and Fisher were all living in mansions on the island, three hotels and two bathhouses had been erected, an aquarium built, and an 18-hole golf course landscaped.

The Town of Miami Beach was chartered on March 26, 1915; it grew to become a City in 1917. Even after the town was incorporated in 1915 under the name of Miami Beach, many visitors thought of the beach strip as Alton Beach, indicating just how well Fisher had advertised his interests there. The Lummus property was called Ocean Beach, with only the Collins interests previously referred to as Miami Beach.

Carl Fisher was the main promoter of Miami Beach's development in the 1920s as the site for wealthy industrialists from the north and Midwest to and build their winter homes here. Many other Northerners were targeted to vacation on the island. To accommodate the wealthy tourists, several grand hotels were built, among them: The Flamingo Hotel, The Fleetwood Hotel, The Floridian, The Nautilus, and the Roney Plaza Hotel. In the 1920s, Fisher and others created much of Miami Beach as a landfill by dredging Biscayne Bay; this man-made territory includes Star, Palm, and Hibiscus Islands, the Sunset Islands, much of Normandy Isle, and all of the Venetian Islands except Belle Isle. The Miami Beach peninsula became an island in April 1925 when Haulover Cut was opened, connecting the ocean to the bay, north of present-day Bal Harbour. The great 1926 Miami hurricane put an end to this prosperous era of the Florida Boom, but in the 1930s Miami Beach still attracted tourists, and investors constructed the mostly small-scale, stucco hotels and rooming houses, for seasonal rental, that comprise much of the present "Art Deco" historic district.

Carl Fisher brought Steve Hannagan to Miami Beach in 1925 as his chief publicist. Hannagan set up the Miami Beach News Bureau and notified news editors that they could "Print anything you want about Miami Beach; just make sure you get our name right." The News Bureau sent thousands of pictures of bathing beauties and press releases to columnists like Walter Winchell and Ed Sullivan. One of Hannagan's favorite venues was a billboard in Times Square, New York City, where he ran two taglines: "'It's always June in Miami Beach' and 'Miami Beach, Where Summer Spends the Winter.'"

South Beach (also known as SoBe, or simply the Beach), the area from Biscayne Street (also known as South Pointe Drive) one block south of 1st Street to about 23rd Street, is one of the more popular areas of Miami Beach. Although topless sunbathing by women has not been officially legalized, female toplessness is tolerated on South Beach and in a few hotel pools on Miami Beach. Before the TV show Miami Vice helped make the area popular, SoBe was under urban blight, with vacant buildings and a high crime rate. Today, it is considered one of the richest commercial areas on the beach, yet poverty and crime still remain in some places near the area.