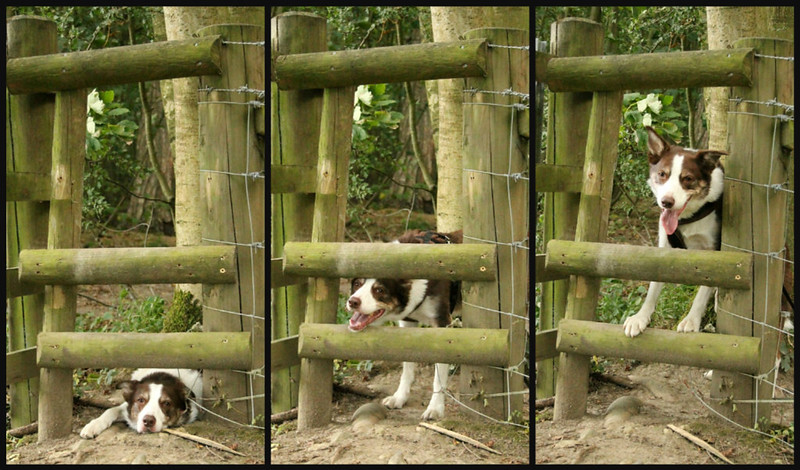 When I took this series of shots, I was standing in a (currently empty) sheep field, Flynn was still in the woods. We've been accessing the field at this spot for years. Until recently, there was simply a hole at ground level, allowing dogs to slip under the fence. To prevent overly adventurous lambs from escaping their enclosure, the hole was blocked with a couple of sticks & it was your job to move & then replace them, once the dog was through.

This summer, the land owner/farmer decided a more secure solution was needed. They fenced the bottom section but kindly made a big gap a little higher up the fence, so dogs can still enter the field - providing they're clever enough to work out how to use it! Flynn is a fit, agile collie, such a low jump should've been no problem but for some reason, he was flummoxed & unable to grasp the concept of jumping *through* the hole. I spent a good 5-10 minutes unsuccessfully encouraging him to hop over & *come* to me. Flynn spent a good 5-10 minutes insisting such a feat was impossible. When he finally put his paws up & had poked his head through the correct hole, I thought surely, he'd figure it out? Nope. He just stood there, staring at me helplessly: "Let me in!".

I'd hoped to get a photo of Flynn successfully working out how to go through the obstacle it became clear he was completely stumped. I had 3 options: give up & rejoin him in the woods, walk off & hope my leaving made Flynn more determined to follow, or go over & lure him in. I worried if I ventured further into the field, he'd panic & run off, trying to find another entrance, or attempt to clear the top & get hurt on barbed wire - so I went & waved a treat, 2 inches from his nose & coaxed him up & over - even so, it took a while to get him in. Once finally through, Flynn charged ahead, as though to say "I am NOT doing that again!". Well, hopefully next time we DO come this way, he'll remember how it's done... Daft dog, he makes me laugh.