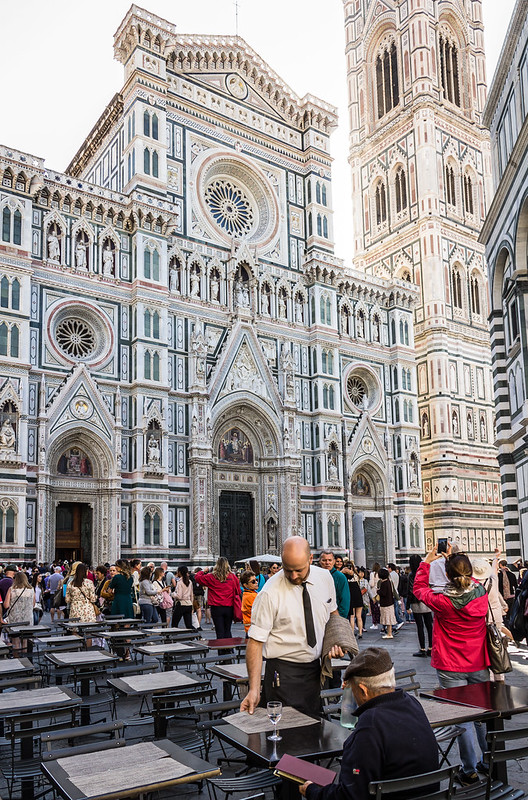 By the beginning of the 15th century, after a hundred years of construction, the structure was still missing its dome. The basic features of the dome had been designed by Arnolfo di Cambio in 1296. His brick model, 4.6 metres (15.1 feet) high, 9.2 metres (30.2 feet) long, was standing in a side aisle of the unfinished building, and had long been sacrosanct. It called for an octagonal dome higher and wider than any that had ever been built, with no external buttresses to keep it from spreading and falling under its own weight.

The commitment to reject traditional Gothic buttresses had been made when Neri di Fioravanti's model was chosen over a competing one by Giovanni di Lapo Ghini. That architectural choice, in 1367, was one of the first events of the Italian Renaissance, marking a break with the Medieval Gothic style and a return to the classic Mediterranean dome. Italian architects regarded Gothic flying buttresses as ugly makeshifts. Furthermore, the use of buttresses was forbidden in Florence, as the style was favored by central Italy's traditional enemies to the north. Neri's model depicted a massive inner dome, open at the top to admit light, like Rome's Pantheon, but enclosed in a thinner outer shell, partly supported by the inner dome, to keep out the weather. It was to stand on an unbuttressed octagonal drum. Neri's dome would need an internal defense against spreading (hoop stress), but none had yet been designed.

The building of such a masonry dome posed many technical problems. Brunelleschi looked to the great dome of the Pantheon in Rome for solutions. The dome of the Pantheon is a single shell of concrete, the formula for which had long since been forgotten. The Pantheon had employed structural centring to support the concrete dome while it cured. This could not be the solution in the case of a dome this size and would put the church out of use. For the height and breadth of the dome designed by Neri, starting 52 metres (171 ft) above the floor and spanning 44 metres (144 ft), there was not enough timber in Tuscany to build the scaffolding and forms. Brunelleschi chose to follow such design and employed a double shell, made of sandstone and marble. Brunelleschi would have to build the dome out of brick, due to its light weight compared to stone and being easier to form, and with nothing under it during construction. To illustrate his proposed structural plan, he constructed a wooden and brick model with the help of Donatello and Nanni di Banco, a model which is still displayed in the Museo dell'Opera del Duomo. The model served as a guide for the craftsmen, but was intentionally incomplete, so as to ensure Brunelleschi's control over the construction.

Brunelleschi's solutions were ingenious, such as his use of the catenary arch for support. The spreading problem was solved by a set of four internal horizontal stone and iron chains, serving as barrel hoops, embedded within the inner dome: one at the top, one at the bottom, with the remaining two evenly spaced between them. A fifth chain, made of wood, was placed between the first and second of the stone chains. Since the dome was octagonal rather than round, a simple chain, squeezing the dome like a barrel hoop, would have put all its pressure on the eight corners of the dome. The chains needed to be rigid octagons, stiff enough to hold their shape, so as not to deform the dome as they held it together.

Each of Brunelleschi's stone chains was built like an octagonal railroad track with parallel rails and cross ties, all made of sandstone beams 43 centimetres (17 in) in diameter and no more than 2.3 metres (7.5 ft) long. The rails were connected end-to-end with lead-glazed iron splices. The cross ties and rails were notched together and then covered with the bricks and mortar of the inner dome. The cross ties of the bottom chain can be seen protruding from the drum at the base of the dome. The others are hidden. Each stone chain was supposed to be reinforced with a standard iron chain made of interlocking links, but a magnetic survey conducted in the 1970s failed to detect any evidence of iron chains, which if they exist are deeply embedded in the thick masonry walls. Brunelleschi also included vertical "ribs" set on the corners of the octagon, curving towards the center point. The ribs, 4 metres (13 ft) deep, are supported by 16 concealed ribs radiating from center. The ribs had slits to take beams that supported platforms, thus allowing the work to progress upward without the need for scaffolding.

A circular masonry dome can be built without supports, called centering, because each course of bricks is a horizontal arch that resists compression. In Florence, the octagonal inner dome was thick enough for an imaginary circle to be embedded in it at each level, a feature that would hold the dome up eventually, but could not hold the bricks in place while the mortar was still wet. Brunelleschi used a herringbone brick pattern to transfer the weight of the freshly laid bricks to the nearest vertical ribs of the non-circular dome.

The outer dome was not thick enough to contain embedded horizontal circles, being only 60 centimetres (2 ft) thick at the base and 30 centimetres (1 ft) thick at the top. To create such circles, Brunelleschi thickened the outer dome at the inside of its corners at nine different elevations, creating nine masonry rings, which can be observed today from the space between the two domes. To counteract hoop stress, the outer dome relies entirely on its attachment to the inner dome and has no embedded chains.

A modern understanding of physical laws and the mathematical tools for calculating stresses were centuries in the future. Brunelleschi, like all cathedral builders, had to rely on intuition and whatever he could learn from the large scale models he built. To lift 37,000 tons of material, including over 4 million bricks, he invented hoisting machines and lewissons for hoisting large stones. These specially designed machines and his structural innovations were Brunelleschi's chief contribution to architecture. Although he was executing an aesthetic plan made half a century earlier, it is his name, rather than Neri's, that is commonly associated with the dome.

Brunelleschi's ability to crown the dome with a lantern was questioned and he had to undergo another competition, even though there had been evidence that Brunelleschi had been working on a design for a lantern for the upper part of the dome. The evidence is shown in the curvature, which was made steeper than the original model.[30] He was declared the winner over his competitors Lorenzo Ghiberti and Antonio Ciaccheri. His design (now on display in the Museum Opera del Duomo) was for an octagonal lantern with eight radiating buttresses and eight high arched windows. Construction of the lantern was begun a few months before his death in 1446. Then, for 15 years, little progress was possible, due to alterations by several architects. The lantern was finally completed by Brunelleschi's friend Michelozzo in 1461. The conical roof was crowned with a gilt copper ball and cross, containing holy relics, by Verrocchio in 1469. This brings the total height of the dome and lantern to 114.5 metres (376 ft). This copper ball was struck by lightning on 17 July 1600 and fell down. It was replaced by an even larger one two years later.


The commission for this gilt copper ball [atop the lantern] went to the sculptor Andrea del Verrocchio, in whose workshop there was at this time a young apprentice named Leonardo da Vinci. Fascinated by Filippo's [Brunelleschi's] machines, which Verrocchio used to hoist the ball, Leonardo made a series of sketches of them and, as a result, is often given credit for their invention.

Leonardo might have also participated in the design of the bronze ball, as stated in the G manuscript of Paris "Remember the way we soldered the ball of Santa Maria del Fiore".

The decorations of the drum gallery by Baccio d'Agnolo were never finished after being disapproved by no one less than Michelangelo.

A huge statue of Brunelleschi now sits outside the Palazzo dei Canonici in the Piazza del Duomo, looking thoughtfully up towards his greatest achievement, the dome that would forever dominate the panorama of Florence. It is still the largest masonry dome in the world.

The building of the cathedral had started in 1296 with the design of Arnolfo di Cambio and was completed in 1469 with the placing of Verrochio's copper ball atop the lantern. But the façade was still unfinished and would remain so until the 19th century.