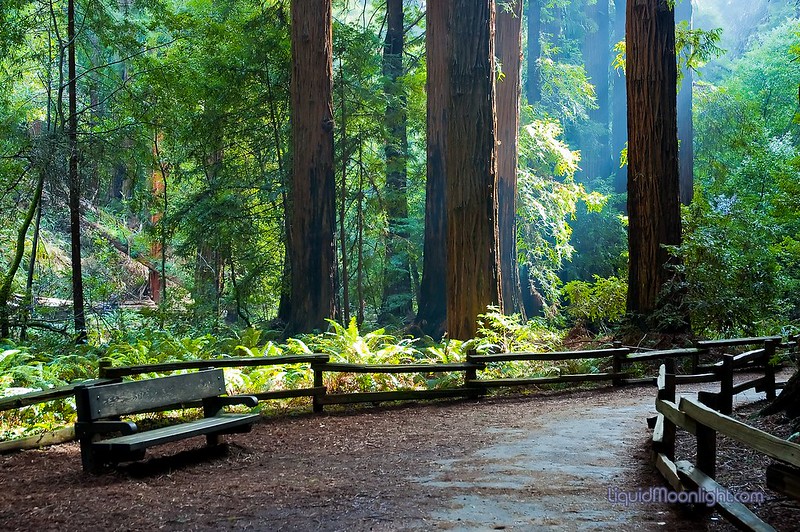 Along the California Coast sits a little hidden grove of Redwoods deep down
a steep canyon. These incredible trees would be only mentioned in history
books had access to the canyon not been so difficult. You see, these trees
lay not far from the hustle bustle of one of California's large and most
rebuilt city, San Francisco. That and some good foresight by early
conservationist saved these trees so I could walk amongst them and enjoy one
of the greatest beauties of nature. A old growth redwood rainforest.
There used to be many such groves along the California Coast but
unfortunately many were lost to logging. This one is especially rare due to
its proximity to San Francisco. Most of the redwood groves near San
Francisco had long since been cut down due to the high demand for wood. Had
these trees not been hidden deep in a canyon, they too would likely have
disappeared long ago. And you can't just replant one of these forests.
Some of these trees are well over 2000 years old.

I had been looking to get a serious camera. Digital had finally caught up
with where I needed it to be and I was ready to move from my point and shoot
Olympus to something in a serious SLR camera. I debated long and hard
whether or not to go Canon or Nikon. It wasn't an easy decision but in the
end, it was simply how the camera felt in my hands that made me choose Nikon
for better or worse. Many people had recommended both models but the D70
was newer, felt more sturdy in my hand and had a few additional features.
Had it been a year or two later and I might have gone Canon. Now that I
have my D300, I am not sorry that I went down the Nikon line. They are both
good cameras and I would recommend to anyone considering going digital to
grab one of each and see how it feels. With on line camera stores becoming
the only way to buy, this is getting harder and harder to do.

This was one of the first real photo shoots I had gone on and of course John
Muir National Monument was the first place, in part because it was close and
also because I had gotten several descent but not great shots there with my
point and shoot cameras. It sure worked out for me and this image
currently hangs over my mantel printed at 20 x 30 on canvas and framed in
suitably in redwood. This shot was taken on a tripod with a polarizer
filter. The day was ending and the fog above was beginning to roll in
making the rays of the sun more pronounced. The sun peaked in just behind
this one bench and lit up the ferns just right. The sun also hit the
redwoods just right giving them a deep dark luster. Printed on canvas and
varnished it looks even richer. Hopefully you have a good monitor and the
colors are coming though real well. The sky turned even more bluish due in
part to the circular polarizer filter I had purchased with the camera. If
you want to take pictures outdoors, get yourself one of these filters
regardless of your camera. It will be worth it. They really intensify the
colors in any shot by blocking some of the reflected light.

I had also gone to KenRockwell.com and found a page on exactly how to
set up the D70. I highly recommend his site for anything you want to know
about your camera, Nikon, Canon or other. I have learned more from his
site than I have from books.

So here is my favorite shot of Muir Woods. Hope you like it.