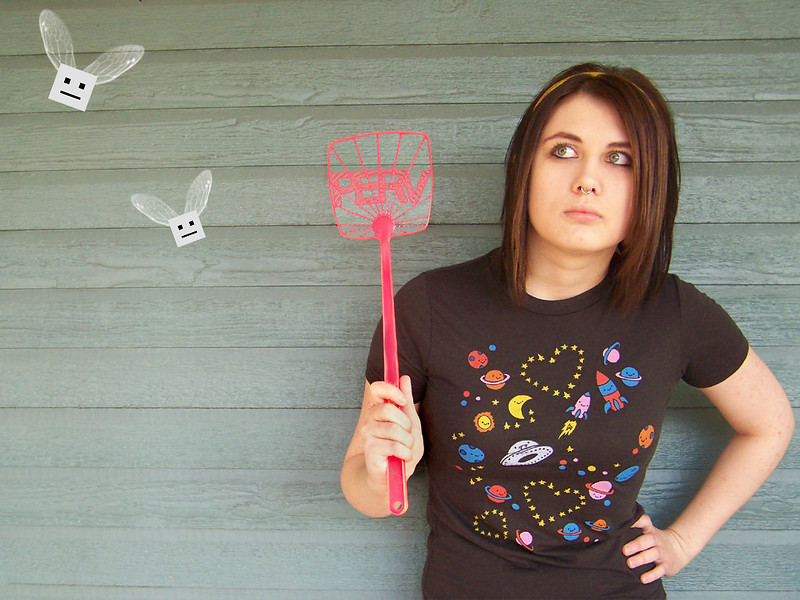 Don't make me use it.

PLEASE VIEW IT LARGE! I worked really hard on it.

AHHH I am SO sorry this is SO late. I planned on getting up early to do this so but I had a really rough night last night and I didn't get to sleep until about 330 this morning. Woke up at 2 this afternoon. I had to do some housework before I shot this because I always feel bad when I make messes and then go take pictures before cleaning up my mess. I'm a mess. Haha.

The Photoshopping for this took an hour and a half. I made my dad go out and get me a fly swatter a few days ago in preparation for this picture. I'm really happy with the way it came out! I sort of wish I'd boosted the saturation though, maybe I'll fix it later.

Anyway. My 'challenge' for you guys was going to be to leave 50 notes on this photo, since it's my day 50 and I love notes and I don't get enough of them :P But since I'm SUPER late posting this, don't worry about it, I'll still post my secret photo tomorrow.

Oh, and I'm still doing a HNT shot, but it'll have to be later. I kicked my brother off the computer to edit this and I promised him he could have it for the rest of the night. So I have to wait til he goes to bed to edit my HNT shot. I'm excited though!