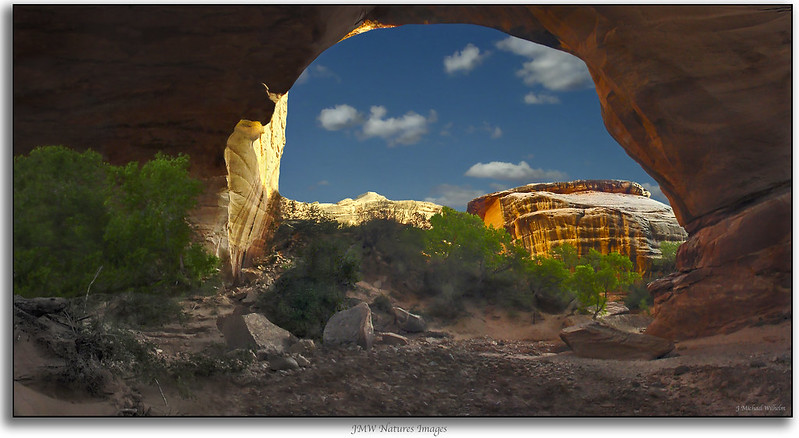 Kachina Bridge is named for the rock art symbols on the face of the bridge that resembles symbols commonly used on kachina dolls. It is a Hopi Indian name. This bridge is the second largest bridge in the Monument. It is 210 ft. high, spans 204 ft, is 44 ft. wide and 93 ft thick at the top. The hike down to the streambed here from the parking area is very steep. Once here, it is quite easy walking to either side of kachina Bridge. You can hike from bridge to bridge once down to this river bed level. Sipapu is 5.6 miles upstream from this point and Owachomo Bridge is 5.4 miles downstream. Horsecollar Ruins is located between Sipapu and Kachina Bridges.

Horsecollar Ruins was what started my fascination with these early Indians and the ruins that they left behind nearly 800 years ago. These Indians were the early culture of many of the tribes of today. They were called Anasazi, "Ancient Ones" a member of an ancient American Indian people of the southwestern US, who flourished between c. 200 BC and AD 1500. The earliest phase of their culture, typified by pit dwellings, is known as the Basket Maker period; the present day Pueblo culture developed from a later stage.

After leaving Natural Bridges I began seeking more information and ruin locations that I could hike to and or parks and monuments that preserved these ruins on the remainder of this trip out west.

I should have mentioned that this was made with my first Sony digital camera and it only had 2.1 MP but did write the file to a mini-disc in Tiff format. That only took 45 seconds and you had to wait as there was no buffer. But the lens was a super sharp Carl Zeiss. My cell phone's camera is 8 MP...progress. Thanks

You can see more of the images that I made at this park here:
www.flickr.com/photos/jmwnaturesimages/albums/72157594313...

BTW, if you like a bit of humor of the things that have happened to me over the years on some of my photo adventures, try reading some of the stories in my Blog. I've just added the last two adventures that happened many years ago. Just waiting for the next humorous adventure to arrive.
I'm sure there must have been a couple of events that happened out of the ordinarily while some other photo adventures, but trying to remember back 15 years now is a real task. But when I do I will write them up and post to my Blog.