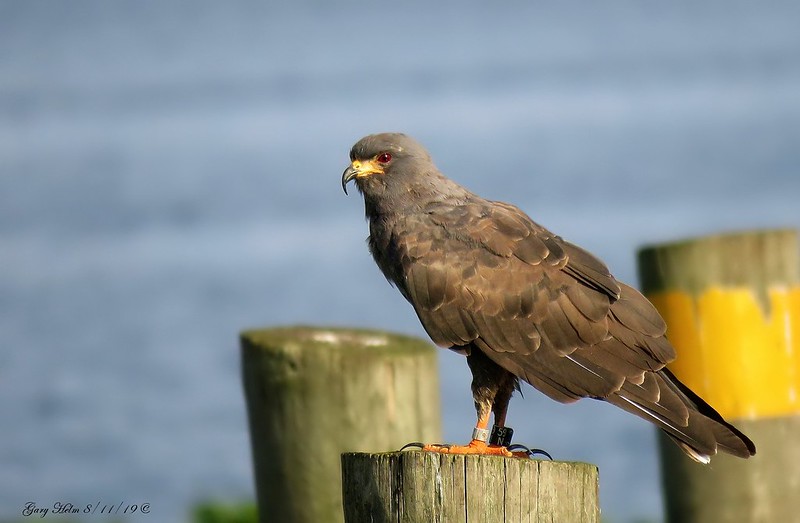 The snail kite (Rostrhamus sociabilis) is a bird of prey within the family Accipitridae, which also includes the eagles, hawks, and Old World vultures. Its relative, the slender-billed kite, is now again placed in Helicolestes, making the genus Rostrhamus monotypic. Usually, it is placed in the milvine kites, but the validity of that group is under investigation. (Okay)


The Florida snail kite is aptly named - it feeds almost exclusively on apple snails and, in the United States, is found only in Florida.
The species was listed as endangered in 1967. Today, the population is considered to be stable, but extremely vulnerable to the stresses of habitat loss, prolonged droughts and anything that affects the availability of apple snails, its primary food.
Snail kites breed from December to August and lay an average of three eggs in bulky nests built in a variety of wetland trees, shrubs and emergent vegetation. During the nesting season, the birds are usually found singly or in pairs; in winter, they often roost together in communal groups.
Lucky observers will witness the snail kite in action, as it searches for its prey by flying low over shallow freshwater marshes scattered with shrubs and trees. When it spots a snail, it swoops down, extends its legs into the water and briefly hovers while it grasps the snail with its talons. While still in flight or after landing on a nearby perch, the kite uses its thin, hooked bill to pull the snail from its shell.

I found this male at Joe Overstreet Landing in Osceola County, Florida.