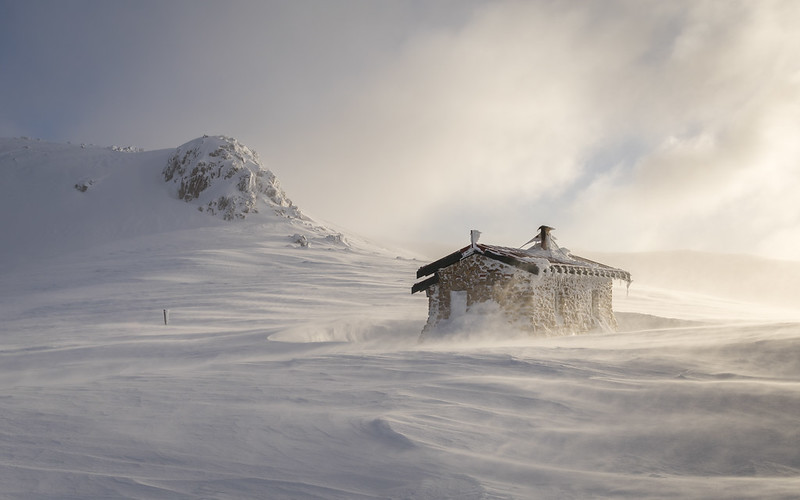 This is Seamans Hut - a real life saver for adventurers in need of a solid shelter.

A couple of weeks ago I spent from Saturday to Saturday - 8 days and 7 nights - camping on the "roof of Australia" with my friend and fellow adventurer Chris, during one of the most bumper ski seasons this country has seen in decades. Words like "snowzilla" and "snowmageddon" have been used to describe it.

It was a surreal experience, being high up on Mount Townsend on the "Western Faces" for over 30 hours as our tents were battered by gale-force gusts that boomed against our tents and reverberated in our ears. I'll never forget the eerie deathly silence between the waves of "attacks". It was just enough time to make me self-aware of my elevated heart beat and sweaty palms, which I raised to my tent walls during these brief moments of quiet for extra bracing as the inevitable assault was launched again by Mother Nature. *boom* *boom* *BOOM*! "You shouldn't be up here", she said in no uncertain terms.

I dragged myself out of the tent on occasion with cold metal snow shovel in hand to dig the excess snow from around my tent (so it wouldn't collapse my tent), and fortify the "wind wall" with whatever hard-pack snow I could find.

Then there was the 4.5 hours of retreat to lower altitudes in complete and nauseating white-out conditions, where I felt the skis go from under me unexpectedly on several occasions. Luckily there was soft fresh snow waiting for me at the bottom of the drop, instead of hard ice.

We eventually made it through avalanche-prone slopes to the safety of Seamans Hut, very relieved yet still in good spirits despite the conditions. We were holed up in the hut for three whole nights as we waited out blizzard conditions outside. On the eve of the third night, the clouds broke up in the afternoon just enough to entice us out of the hut for a shoot, which we were itching for by that stage!

This is truly is a special place, made all the more special by the events leading up to capturing this scene. Enjoy.