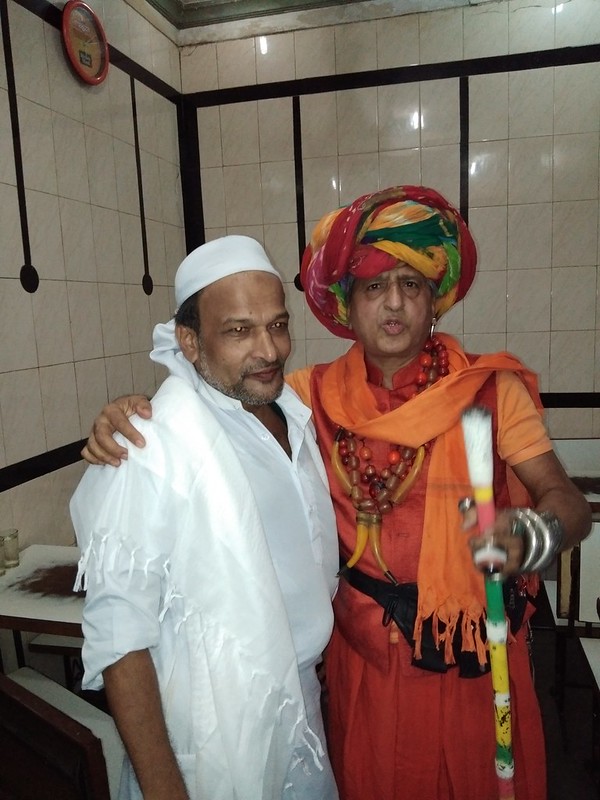 First let me introduce you to Nasir Bhai no 1 exponent of Zarb Rafaee body piercing undertaken during a Sufi procession called the Sandal..

Sandal is sandal paste that is applied to the Holy Saints tomb or floral tribute or an embroidered spread placed on the Shrine of a Holy Saint is is called Chaddar.

During the Sandal procession the rafaee exponents like Nasir bhai or Firoze from Mahim or Bashir Bhai or Salim bhai from Sion are invited ..their boys show skills in swords or body piercing known as Zarb.

I first met Nasir bhai rafaee of the Qadri Rafaee Silsila at Haji Malang 2010 shot a lot of pictures and again at the same time at the procession or Sandal of Maulana Shah Baba that passed by my house at Bandra Baba .

So I was meeting Nasir bhai after 7 years again at the 201 Urus of Ismail Shah Baba Jamli Mohalla off Null Bazar.

I got Nasir Bhais number from Sakib my friend ..

I reached at about 6 pm th sandal started at 7 pm moving through varios lanes paying homage at the Dargah of Karim baba and than the display of zarb at the main Dargah of Ismail Shah baba by Nasir bhai and his team.

Now let me tell you about zarb or body piercing thre is no blood and all this is a mystical manifestation ovrcoming pain and the piercers invoke Ya Ghouse Pak or Peer Abdul Qadir Jilani founder of the Qadri Rafaee Silsila .

Breaking coconuts on the head with a huge wooden baton , using a hack saw on the neck of a boy and many such acts .

I will now start documenting the Qadri Rafae Silsila and Zarb at most Shrines that Nasir bhai is invited for his acts of body piercings .

And honestly this is the genre that interest me most .. I was given a lot of respect and Nasir bhai introduced me to all as Khalifa and Malang Baba .