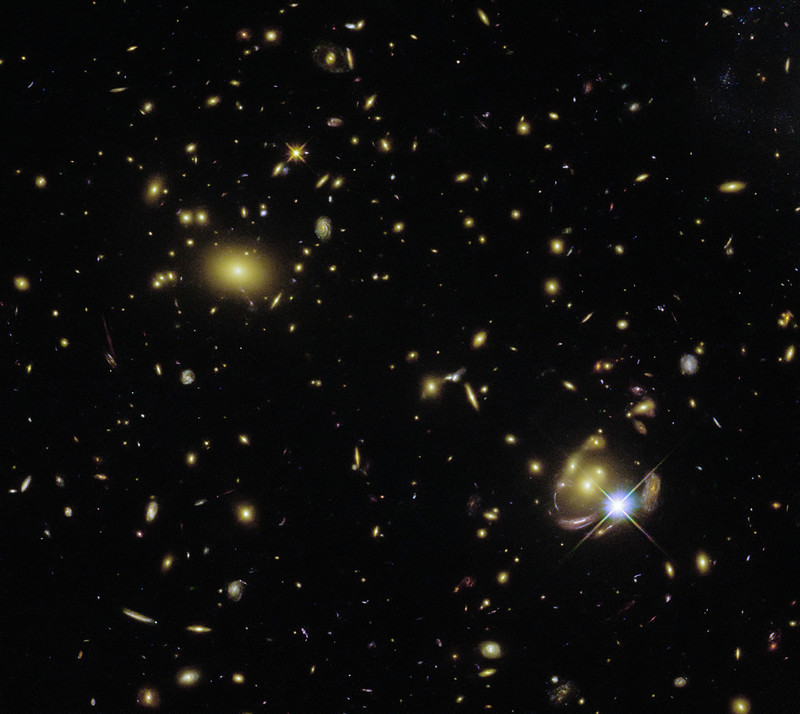 This star- and galaxy-studded image was captured by Hubble’s Wide Field Camera 3 (WFC3), using data that were collected for scientific purposes. The object of interest was a galaxy that is visible in the bottom right corner of the image, named SGAS 0033+02. What makes this particular galaxy interesting is a little unusual — it appears not just once in this image, but three times. The thrice-visible galaxy is a little difficult to spot: it appears once as a curved arc and twice more as small round dots around the star.

SGAS 0033+02’s multiple appearances in the same image are not the result of an error, but instead are due to a remarkable phenomenon known as gravitational lensing. Gravitational lensing occurs when the light from a very distant galaxy — such as SGAS 0033+02 — is curved (or ‘lensed’) by the gravity of a massive celestial object that lies in the foreground, between the distant galaxy and the Earth. SGAS 0033+02 was discovered by its namesake, the Sloan Giant Arcs Survey (SGAS), which aimed to identify highly magnified galaxies that were gravitationally lensed by foreground galaxy clusters. SGAS 0033+02 is of special interest because of its highly unusual proximity in the sky to a very bright star. The star is useful, because it can be used to calibrate and correct observations of the lensed SGAS 0033+02.