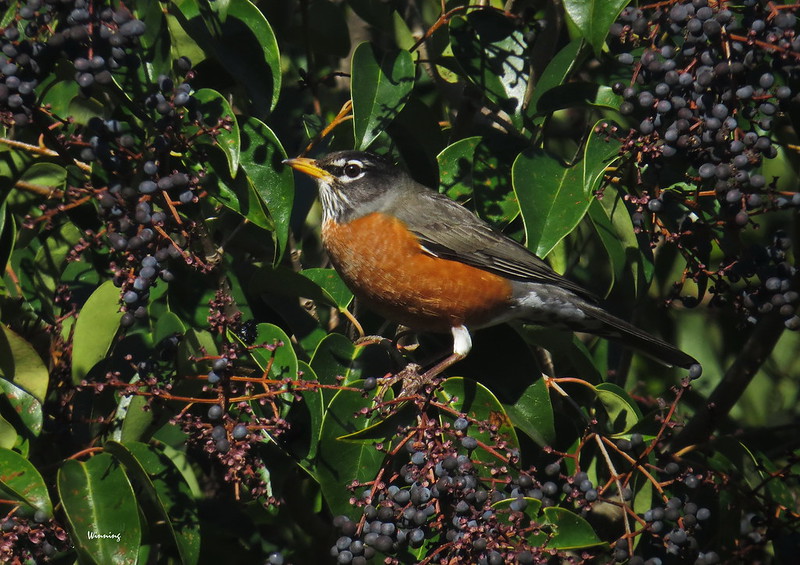 The American Robin, as ubiquitous as it is supposed to be, as ever-present as I *remember* it as a kid in New England, and whose song is as distinctive as a California Quail and should be heard even before the bird is seen, is as difficult a bird to shoot as any that I have tried to capture over the past 20 years! It's at least in the top four. When I saw my first Oak Titmouse, it took top billing, but at it turned out, that really WAS because of equipment. All I has at that time was a 6x S3IX Canon. No burst, no distance, no luck.

I have seen more robins in my birdbath than in the wild. But, ten years ago, I noticed that, at the same time every year, I saw them on the Toyon trees when the berries ripened. They usually came in the middle two weeks of February, and I was going to be prepared.

Then came the drought. The berries ripened later if at all, and I had to wait it out. The Robins invariably arrived with flocks of Cedar Waxwings. To get both species would be fantastic, and so I parked my carcas on the curb across the street from a string of six Toyon trees a few days every week in February for eight years. Then, I noticed two problems: 1. Waxwings and Robins would pick one berry, then fly across the street to a huge Heritage Oak (200+ years old, sometimes 50 feet wide canopy, and always dark). AND always fully leafed on the crown which was about 65 feet up. Getting it in the open, with berry, between trips, was going to be difficult.

I am not a patient person. This was not a hobby for someone who made it mandatory to have a photo, a good photo, of a bird before checking it off my Audubon list. After 20 years, I did (do) have a dozen good images, yet I still hope for even better images and, hence, sit on the curb every year at the same time.

I'm just sorry that Gilles had to leave, but I never expected to get a good image this week, let alone on an overcast Thursday, Feb. 20. I staked out these trees for the past three weeks, and saw neither species and heard no calls. Today, I saw one, then another orange-breasted bird flying from tree to tree. This is my prize for today, looking very much like all the other Robins in an opening between leaves on a toyon.

The American robin (Turdus migratorius) is a migratory songbird of the true thrush genus and Turdidae, the wider thrush family. It is named after the European robin because of its reddish-orange breast, though the two species are not closely related, with the European robin belonging to the Old World flycatcher family. The American robin is widely distributed throughout North America, wintering from southern Canada to central Mexico and along the Pacific Coast. According to some sources, the American robin ranks behind only the red-winged blackbird (and just ahead of the introduced European starling and the not-always-naturally-occurring house finch) as the most abundant extant land bird in North America. Odd that I should see so few. Odder still why I have seen no nests since leaving New England in 1959! Robin-blue eggs were a prize sighting when I was a kid, but I guess they don't like adults.