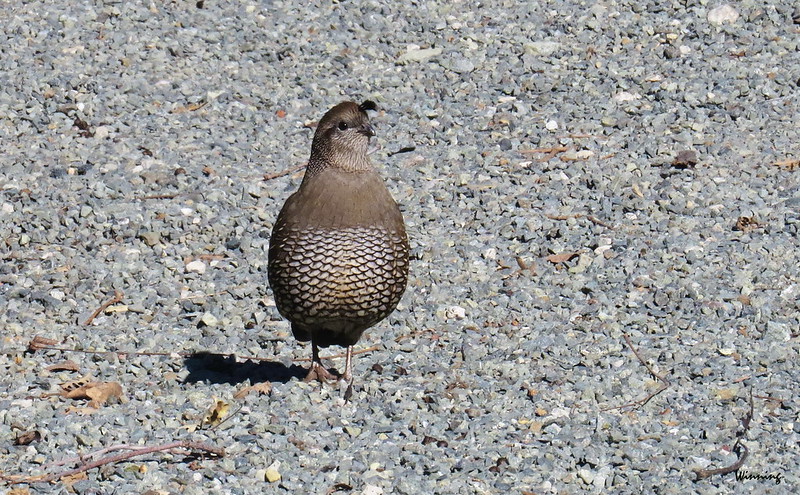 It's been four, maybe five years since I was up at Old Borges Ranch, when I decided on Tuesday that that's an ideal place for my friend to see a California Quail. After about 20 minutes, as we walked near the old barn and ranch house where I got MY first 10 years ago, the familiar calls were hard. And then, scrambling in all directions were males and females. The rest was up to him, and he was certainly up to the task. I, on the other hand, was happy to settle for this one indecisive female. She looked left, then right, and basically gave me three seconds to make a choice. And here she is, almost ready to breed. We didn't see any chicks which, when you first see quail can be distracting. Well, I'm easily distracted and in the process, I get none. Things haven't changed in a decade.

The California quail (Callipepla californica), also known as the California valley quail or valley quail, is a small ground-dwelling bird in the New World quail family. These birds have a curving crest or plume, made of six feathers, that droops forward: black in males and brown in females; the flanks are brown with white streaks. Males have a dark brown cap and a black face with a brown back, a grey-blue chest and a light brown belly. Females and immature birds are mainly grey-brown with a light-colored belly.

Their closest relative is Gambel's quail which has a more southerly distribution and, a longer crest at 2.5 in (6.4 cm), a brighter head and a scalier appearance. The two species separated about 1–2 million years ago, during the Late Pliocene or Early Pleistocene. It was an amicable separation. Mostly found in the one state, it is the state bird of California.

It's population was so depleted on the mountain that preservation began about 25 years ago under the supervision of Bob Weiscarver. He did a wonderful job, and I used to pass the 100 yards of restoration every day for seven years. That didn't make getting a good image any easier. These are very cautious birds, especially the females, and will bolt from one hiding place to another, and almost always under the coyote bushes. Once I got to know the habits and, during the years when there were fence posts along the one mile stretch of meadow, I could more easily (not easily) get images of the male who watches over his family groups, usually from my experience, a covey of two females and ten or more chicks.