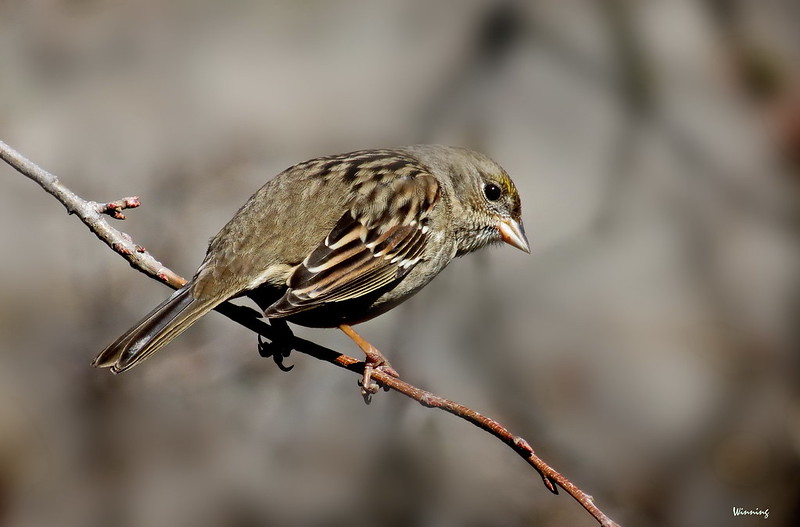 Yesterday, I went to my three favorite locations, certainly for birds, but nature in general. I took over 600 images. I have four possibles to post, and two of those are iffy. I've often said that lighting here is usually AM "iffy" with a very small window where it is perfect (overhead, slightly behind, and not reflected off water). This particular Golden-crowned sparrow, a month away from breeding plumage, was one of the few with good focus, was taken because, after focusing on it, was the best I'd gotten to that point. It's in the same tree and on a similar branch as one that I took almost four years ago to the day.

I was shooting with a Flickr friend who visited for the day. I know that he'll have much better images, and I'm really happy for that. Am I that altruistic? Yes. He traveled far. He is and always has been more proficient than I, and has taught he a lot. Most important, however, is that I "promised" he's get quite a few lifers, and that I had perfect locations for him. Last week, I went to all the locations, and came away with nothing. Monday, I remembered that my favorite place, Old Borges Ranch on Mt. Diablo, had provided me with nine lifers for me and I'd forgotten about that. So, I settled down a bit, and was most concerned about weather.

Well he arrived, we went to Old Borges Ranch, and I (and Debi, the ranger's wife and life-long birder and naturalist) acted as spotters (sort of). As he clicked off several lifers, I think I might have been happier than he, although he did a dance better than mine. After all these years, I got to prove that I wasn't exaggerating.

The golden-crowned sparrow is one of five species in the genus Zonotrichia, a group of large American sparrows. It has no subspecies. It is a sister species with, and very closely related to, the white-crowned sparrow; studies of mitochondrial DNA show the two evolved into separate species very recently in geologic time. The white-throated sparrow is a slightly more distant relative. Hybridization with both white-crowned and white-throated sparrows has been reported. The golden-crowned sparrow is common along the western edge of North America. It is a migratory species, breeding from north-central Alaska, central Yukon south to the northwestern corner of the US state of Washington, and wintering from southern coastal Alaska to northern Baja California.

That's all I'm saying. In a few weeks, he'll post and I'll tell the rest of the story. Just know that this sparrow was my best. Next best was barely considered a keeper. And after all was said and done, it was a great day, so great that I forgot my *^#*! dentist appointment this morning.