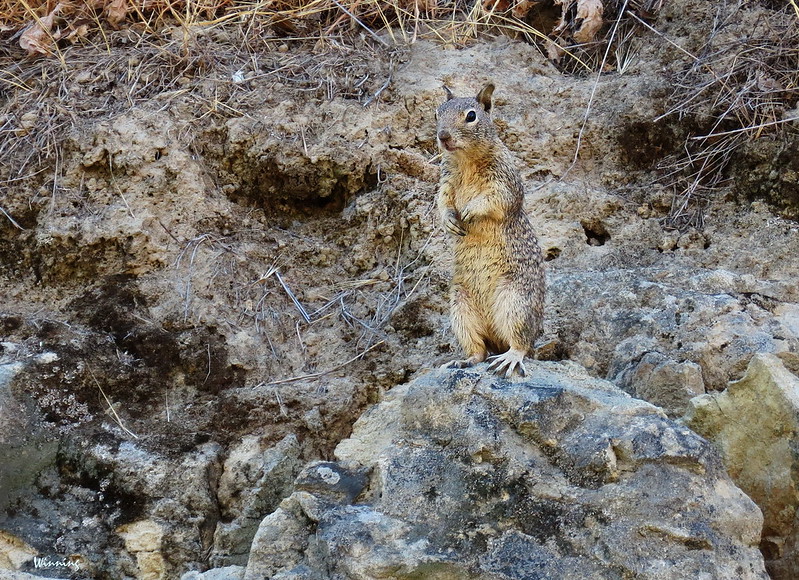 In the 9-16 years I rarely missed a day of hiking the foothills of Mt. Diablo and the East Bay Regional Hills, I doubt if there was a day when I didn't see a California Ground Squirrel. I never learned much about them. In fact, all I did learn was by observing them. I'm sure they were in communities but more spread out than Prairie Dog Towns. I also watched them long enough to know that every burrow had at least two entrances and exits or exits and entrances, each about 80 feet (my estimate) from the next. There were no signs saying, "Welcome" or "Go Away," but when the call went out that a raptor had been spotted (by this guy who was the designated sentry for the day), there'd be squirrels bolting in all directions and down the hole for safety. Their system wasn't foolproof or even raptor proof, but most often, when I saw one that had been caught off guard, it was obvious he was never on his guard to begin with: every kill I saw was to a Western Diamondback. I never could stand to watch the process: just something about squirrels...

The California ground squirrel (Otospermophilus beecheyi), also known as the Beechey ground squirrel, is a common and easily observed ground squirrel of the western United States and the Baja California Peninsula; it is common in Oregon and California and its range has relatively recently extended into Washington and northwestern Nevada.

As is typical for ground squirrels, California ground squirrels live in burrows which they excavate themselves. Some burrows are occupied communally but each individual squirrel has its own entrance. Although they readily become tame in areas used by humans, and quickly learn to take food left or offered by picnickers, they spend most of their time within 25 m (82 ft) of their burrow, and rarely go further than 50 m (160 ft) from it. How about that, I estimated correctly. So my seven years was not a total waste.

In the colder parts of their range, California ground squirrels hibernate for several months, but in areas where winters have no snow, most squirrels are active year-round. In those parts where the summers are hot they may also estivate for periods of a few days. Squirrels mate for only two weeks during the spring and the pups become sexually active at one year. In other words, there will always be a lot of squirrels. They eat seeds and some insects and, though I've never - not in 50 years - seen one in town or burbs, supposedly they're "the scourge of suburban neighborhoods," a statement made by someone who doesn't like squirrels, because the more likely culprit would be mule deer which have roses as the entree to every other meal. Wild turkeys around here do quite a bit of damage as well though they live in the hills. If you're wealthy enough to live in one of the cities that abut the Open Space of Diablo, you're wealthy enough to replace your roses. If you have no money, what are you doing living in an $8 million home on Diablo, and still entertaining having wild turkey for Thanksgiving?

Just a short story: One of the owners of one of the "estates" went to court to have his property taxes reduced because he didn't know that the wildlife was going to eat him out of house and home. Case dismissed: have the wildlife chip in to pay the taxes was the wry reply.