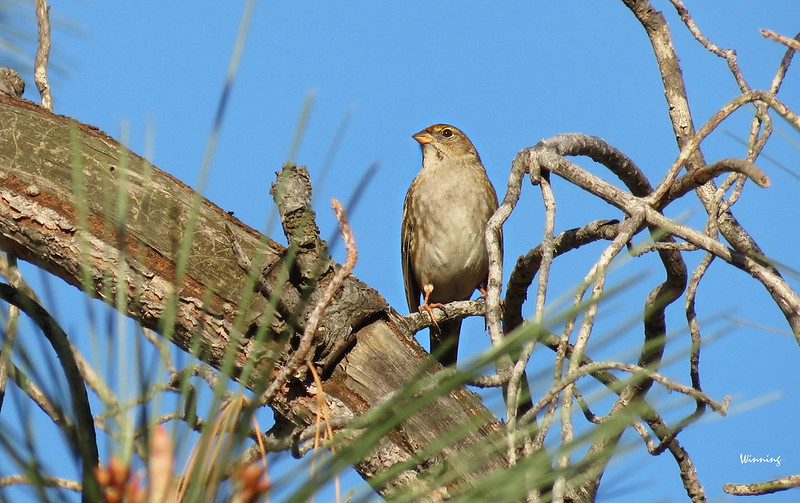 There are five "prime" birding areas within a 15 mile radius of my home. "Prime" is defined as those places within easy walking or driving and then walking distances of my home. And it is within three of those areas that I have seen and photographed 104 species of birds in 20 years.

As years tick by, and I've had to come to grips with well, age, I've adjusted to weather conditions and my abilities to hike what has become rough terrain. In other words, the six to 10 mile hikes in the foothills are things of the past. Over the past five years, I've gone over archives and notes to find what birds (lizards, snakes, and even wildflowers) can be found at lower elevations and with as few steep trails, having found that 3-5% grades are maximum. And then I have to take migration and seasonal changes. There will be no more hikes in 100+ temperatures, BUT I can still walk the two miles to the swamp and withstand 106 degrees if I just remember to wear a hat, take water, drink water (when I'm in "the zone" in THE Odonata grotto, I sometimes ... often forget to drink as well as remember that there's two miles to walk to get back home), and take the extra battery.

So. Twenty years ago, when I discovered my first California Quail, American Kestrel, and Acorn Woodpeckers, I would drive to a "staging" area (used mostly for bicyclists climbing Mt. Diablo from any one of the four directions) and then hike for miles, sometimes in circles, to get any decent capture, and then hike up to six miles as the crow walks. In the process, I would eventually get some pretty good shots - even with a Canon S3IS - and in the process find Southern Alligator Lizards, Western Diamondbacks, and all kinds of "new" species like my first Western Bluebird (the bird that hooked me!) and twice, rarities for this area. The find of a Rock Wren at 900 vertical feet became a 30 day daily expedition over the toughest trail from any direction. Twice I became dehydrated, and finally Mother Nature and my heart told me that I wasn't 30 anymore. (I never was, come to think of it.)

I have a visitor from the east (sounds downright mystical, doesn't it) coming tomorrow, and he wants to see his first Acorn Woodpecker. Not the best time of year, but I know where to find "the" woodpecker trees. One route is five miles one way on "hilly" trails, and I've been trying to find another way. Last night, I remembered that at one of my prime birding areas, Old Borges Ranch, I'd ver often heard the "Ratcha, Ratcha, Ratcha" call of the Acorn Woodpecker. (No matter what the guide books or apps say, it is spelled "Ratcha, Ratcha, Ratcha," always capitalized according to the peckers I've talked to.) A short drive, and we could just sit and wait, or we could take a one mile trek to find them and, in the process, the bluebirds, Cooper's hawks, Blacktailed deer, and even the "lowly" but ever-present House Finch. And that is my upload for today.

The House Finch is ubiquitous, estimated at 1.2 billion birds in North America. The maps are incorrect in labeling only parts of Western Canada as "breeding." They're bred in the eaves of my home, and I'm sure that the hundreds of bright red (or orange) males didn't fly down from British Columbia to show me their new suits with which to entice the ladies. Females seem to show appear first, followed by males in a week or two, and courtship begins as early as January. It is usually the second bird (the first is the oak titmouse with a huge voice for a three-inch bird) I hear every year. The Oregon Junco will nest third IF we don't have the gangs of crows roosting as they are right now: I counted over 30 or 15 twice just yesterday on my way to find the Cedar Waxwings and Robins at the toyon trees, but the crows have really put them off this year.

This female House finch was just short of my destination of Heather Farm (the swamp). She didn't sing - never does as far as I know - but I saw her and it was the start of my 2020 season or artchives depending on how you look at it in a year. I guess what I'm telling you is that we all have to adapt at some time in our lives. I may not like it, but I've adapted, and am so lucky to be in a birder's paradise, less so with the population doubling and that I cannot adapt to. Anyway, wherever you are, just keep your eyes open and stay alert to the sounds around you, and you may find much more than you've experienced for however long you've been existing if not living. No birds? Have you ever looked at a dragonfly?