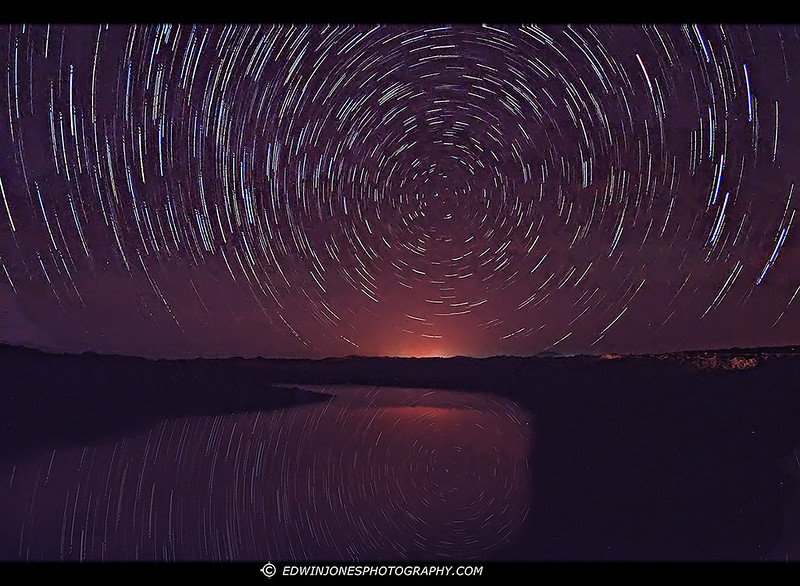 This was taken Saturday evening which was a particularly clear night in Lanzarote. I went to a location on the southern coast near El Golfo where there is very little light pollution. The main light on the horizon is from the small village of El Golfo a short way to the north. Brightening the Star Trails did the same for the light and the clouds but I liked the effect so left it that way.

I used my Android Smartphone with Google Sky Map App to locate the North Star, Polaris and point the Camera in that direction.

I started at about 9.10 with exposures of 30 seconds for 30 minutes so 60 exposures. There was very little flare from passing cars as the nearby road was closed for repairs further on. The location is on a beach with a large tidal pool in the foreground.

For the Star Trails the stacking software works on jpegs which are then saved as a Tiff.

After opening in Photoshop general adjustments in levels and curves to increase lightness and contrast and bring up more star trails.

Brightness increased 125 points excluding the foreground with a mask

Layers flattened before going on to sharpening .

Another duplicate layes was brought up to first apply Topaz DeNoise at a very strong level. Then another layer for Topaz Adjust Vibrance presets, Detail strong 2 with some adjustments to further bring out the Star Trails.

I had aimed to get some reflections of the star trails in the pool but it didn’t come out too well so I made a Photoshop adjustment. Selected the top part of the image with the rectangular marquee too, copied paste, duplicate as a layer, edit, transform and flip. Then dragged to bottom of image. Set layer opacity at 20% for a more realistic reflection and used a layer mask to apply the reflected trails only to the pool.