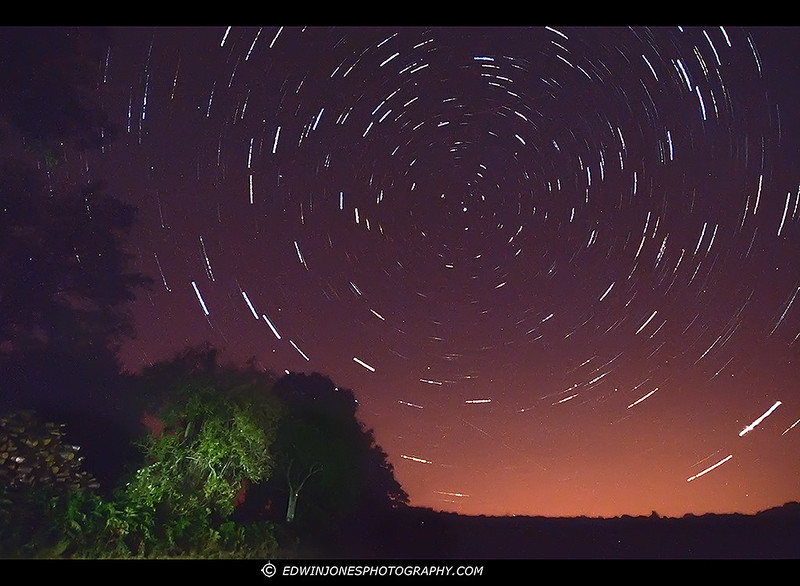 The Shot
I have seen pictures of Star Trails before but this was my first attempt. I started with a lot of Internet research. The most important requirement is a clear night in an area as free from light pollution as possible.

The clear skies worked out well. Over the last week we have had an exceptional heat wave in the UK with temperatures reaching 29.9C (86F) an October record on Saturday 1 October. All week the skies were clear day and night. Usually here on the coast south of London we get many jets high overhead flying from London 70 miles to the north. These form contrails which spread out and gradually great a haze. I noticed on Friday these just disappeared soon after forming. The moon was also a crescent moon setting soon after the sun.

Friday night was chosen. The next problem was light pollution. I found a really neat light pollution simulator website for the UK at www.need-less.org.uk/ . Here you can click a location on a map and it will give a simulation of the night sky from that point with probable light pollution. Here on the Sussex coast there is a string of towns so a lot of light. However a short way inland there are the South Downs. This is an area of rolling chalk hills with small villages. Originally an area of outstanding natural beauty it gained further protection this year by becoming the UKs latest National Park. I choose an area called Madehurst, a few houses in the middle of the Downs about 10 miles from home. Here there is a little road which runs north before turning into a track.

There are 2 methods, either one long exposure of 20 minutes plus or a lot of shorter exposures later blended together. The problem with the first is if something goes wrong such as a tractor passing or a walker with a flashlight you can lose the whole thing so I went for the second. It would normally be very time consuming to blend all the pictures together but there is now free software available to do it for you at www.startrails.de/html/software.html

With the method of stacking together shorter exposures noise is not such an issue so I turned off the Cameras noise reduction settings. If these are turned on it doubles the exposure length as a second image is taken automatically of the same length for the noise reduction process. Noise was corrected later with software. Also a higher ISO is required to get the stars to register in 30 seconds so I used ISO 800 and f4.5

I arrived early to get set up with a little light. It is then necessary to wait for Astronomical Night which on that night was an hour and 45 minutes after Sunset. I used weatherunderground for the location which has an Almanac section which includes that. This is the time when all light from the sun has left the sky and the maximum number of stars is available.

The circular pattern is formed by pointing the camera towards Polaris the Pole Star near the Plough. As the Earth turns stars more above the pole do not appear to move as much as those more above lower latitudes. I should have brought a compass to set up correctly in the light as when the plough was visible I had to move position using a torch.

The light on the horizon is either light from a bigger town due north such as Guildford or probably more general Sky Glow from London 60 miles to the north.

I tried out the light painting method for the first time by shining a torch on the trees in a few of the exposures. I probably should have done that more or possibly as a separate sequence to be blended in later.

I took some test exposures to check the stars showed up. I hit a snag soon after starting the sequence when I noticed the pictures were fogged due to condensation. This was forming on the skylight filter I always keep over the lens. I left out the fogged images from the sequence and used a lens cleaning cloth to wipe the filter every 3 exposures.


Tips
- Arrive early, bring a compass or iPhone, to help find the north star.
- Setup gear while it’s still light, get your composition and wait.
- Shoot test shots, check light, make sure you can see the first stars.
- Wait for that perfect moment, then start the exposure.
- Bring a torch, so you can find you way and make adjustments after dark.

General adjustments in levels and curves to increase lightness and bring up more star trails. A mask was used to part exclude the foreground and trees from the adjustment.

The spot healing brush with the content aware setting in CS5 was used to clear up a trail from a plane.