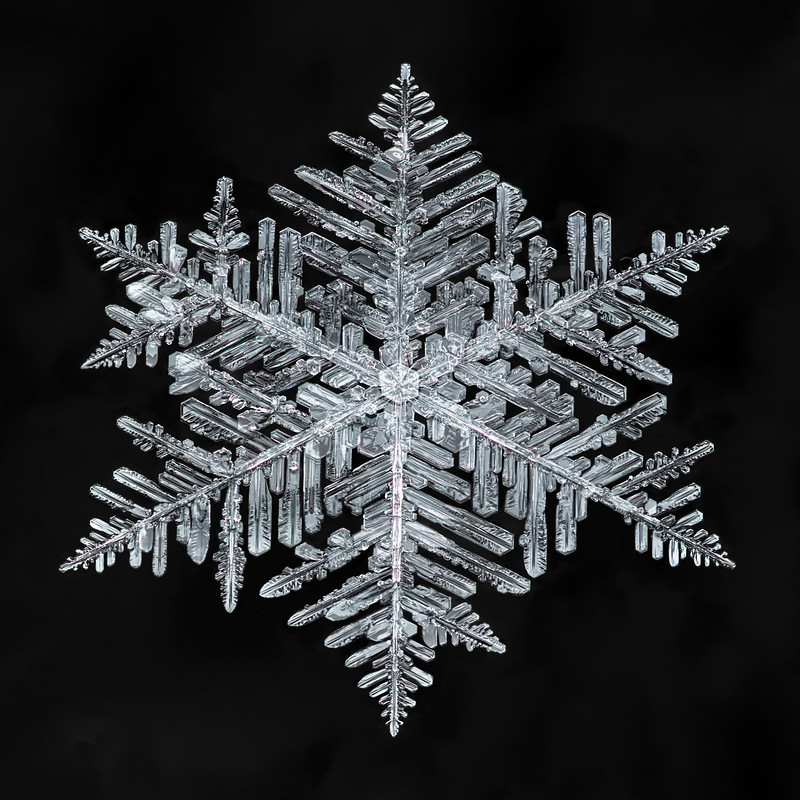 Good news: I have finished shipping all of my books! Before I transition to a ton of printmaking, I decided to take some time while recovering from my second COVID vaccine (they knock me off my feet for a few days) to edit a snowflake shot this past winter, and share with you one of the most beautiful gems I discovered this year.

If you have yet to explore a copy of my new book, I have some ready to ship out next-day. They can be purchased here: skycrystals.ca/product/pre-order-macro-photography-the-un...

This snowflake is one of my favourite varieties: the classic “stellar dendrite”, but it has some features that allow it to stand out in a crowd. The very center of the snowflake reveals that this crystal began its life as a column-type crystal, evidenced by the tiny circle in the center of the central hexagon. This is the remnant of the column, which at some point grew two plates from either side – at that stage it would have been identified as a “capped column” snowflake. Those plates continues to grow outward, and if one side faces the prevailing wind for a longer time, it’ll grow faster and its footprint becomes larger than its competition. Whatever sticks out the farthest, grows the fastest, so one plate always remained small while the other plate went on to develop branches and side-branches galore.

If the snowflake started out as a hexagonal column, why is that tiny dot in the center circular? Sublimation! The area between the two plates, having no real access to water vapour from the cloud where the snowflake was forming, becomes an area of extremely low humidity. In these areas, a snowflake evaporates from a solid directly to gas, and hexagonal features become rounded.

This snowflake features a fair amount of thick “anvil” growth as well, often associated with “skeletal form”-type crystals. This happens when a ridge along the “spine” of a branch grows taller, so tall that the top edge can grow outward, explained but the same physics that causes plates to grow on either side of a column. This generates an extra layer of ice on top of the already-existing branch. Look closely and you’ll see this happening on all the branches, just outside of the center.

You might also notice some overlapping branches on the left side of this snowflake. These are allowed to form because of the above-mentioned complexities. If a crystal is growing outward all on the same plane, these branches would meet up and fuse together – this is seen on parts of the snowflake as well. However, if some branches are growing on different planes, they’ll never meet – and overlapping growth can be seen.

Snowflakes are fun physics puzzles that I never tire of understanding. :)