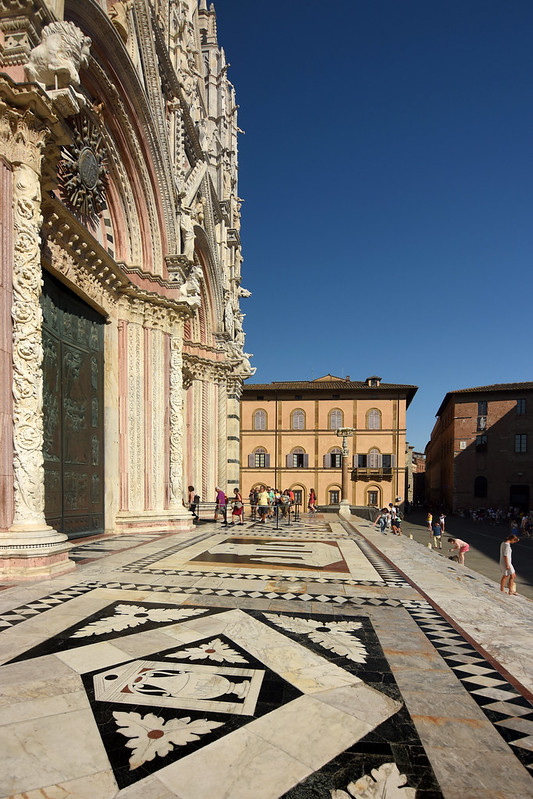 The exterior of Duomo in Siena lit by some lovely early evening light.

We visited quite a few churches and Cathedrals whilst in Tuscany (as you do......) but Siena Duomo was probably my favourite for it's distinctive stripey stonework.

From Wikipedia : "Siena Cathedral (Italian: Duomo di Siena) is a medieval church in Siena, Italy, dedicated from its earliest days as a Roman Catholic Marian church, and now dedicated to the Assumption of Mary.

The cathedral was designed and completed between 1215 and 1263 on the site of an earlier structure. It has the form of a Latin cross with a slightly projecting transept, a dome and a bell tower. The dome rises from a hexagonal base with supporting columns. The dome was completed in 1264. The lantern atop the dome was added by Gian Lorenzo Bernini. The bell tower has six bells, where the oldest one was cast in 1149. The nave is separated from the two aisles by semicircular arches. The exterior and interior are constructed of white and greenish-black marble in alternating stripes, with the addition of red marble on the façade. Black and white are the symbolic colors of Siena, etiologically linked to black and white horses of the legendary city's founders, Senius and Aschius. There are thirty-five statues of prophets and patriarchs grouped around the virgin. The finest Italian artists of that era completed works in the cathedral. These artists were Nicola and Giovanni Pisano, Donatello, Pinturicchio, Lorenzo Ghiberti, and Bernini. "