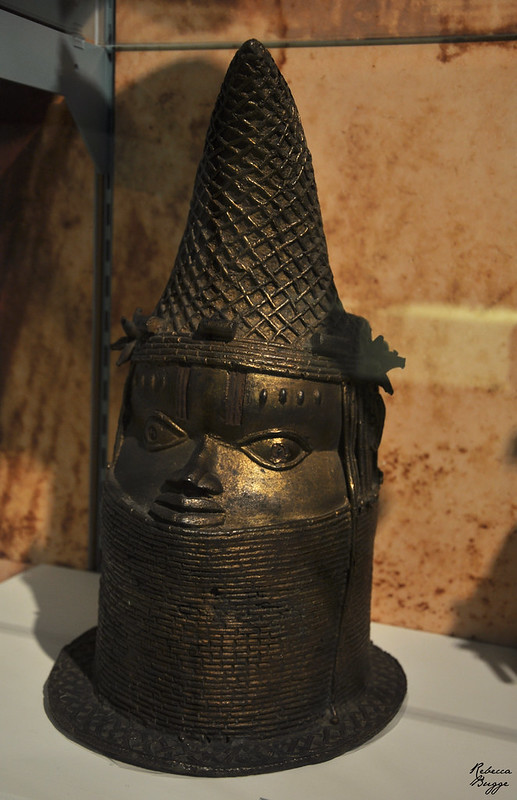 This head, made of bronze and brass, represent a Benin queen (Iyoba) in traditional dress. Heads like this were made to represent kings and queens, dedicated to honour deceased members of the royal family at shrines.

These heads entered the international art market after British troops raided the Benin city (the known as Edo) in 1897 - a retaliation after Benin warriors had killed the greater part of an expedition which had tried to make its way to Benin city. The Brits, in the official documents, claimed this retaliation (which destroyed the city, the royal palace and displacing a royal family which had been in power for more than 600 years) was justified since the expedition had been out on a peaceful mission - ignoring the fact that the real goal for that expedition had been to displace the king, who had a monopoly on trade in the area (the cost for this expedition was supposed to be covered by the ivories they were expected to find in the royal palace). This spelt the end of the Benin kingdom.

Benin city still exists, located in southern Nigeria - the state that is now known as Benin was formally called Dahomey, but changed its name in the 1970s - though it is named after the kingdom of Benin even with the lack of an actual historical connection.

It is estimated that only about 50 of the Benin bronzes are still in Nigeria, but some 2 400 can be found in the rest of the world.

This head is one of several that is on display at the Museum of Archaeology and Anthropology in Cambridge.