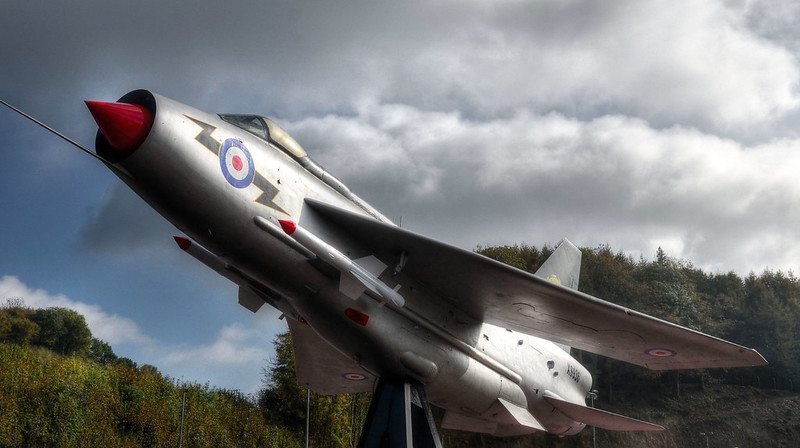 Having only a few seconds before been driving along a steep wooded river valley it came as a bit of a shock to come across this outstanding RAF interceptor of the '60s and '70s. It was mounted on a plinth on the premises of Castle Air just off the A38 near Liskeard in Cornwall.

It is actually 31 years since this plane took its last flight in November 1987. According to Wikipedia, the Lightning remains the only UK-designed and built fighter capable of Mach 2. It was designed, developed, and initially manufactured by English Electric and was operated by the RAF, the Kuwait Air Force and the Royal Saudi Air Force.

The Lightning was initially designed and developed as a high speed interceptor to defend the V bomber airfields from attack by anticipated future nuclear-armed supersonic Soviet bombers such as the Tupolev Tu-22, but it was subsequently also required to intercept other bomber aircraft such as the Tupolev Tu-16 and the Tupolev Tu-95. The Lightning had an exceptional rate of climb, ceiling, and speed but was limited by its fuel capacity. Later developments provided greater range and speed along with aerial reconnaissance and ground-attack capability.