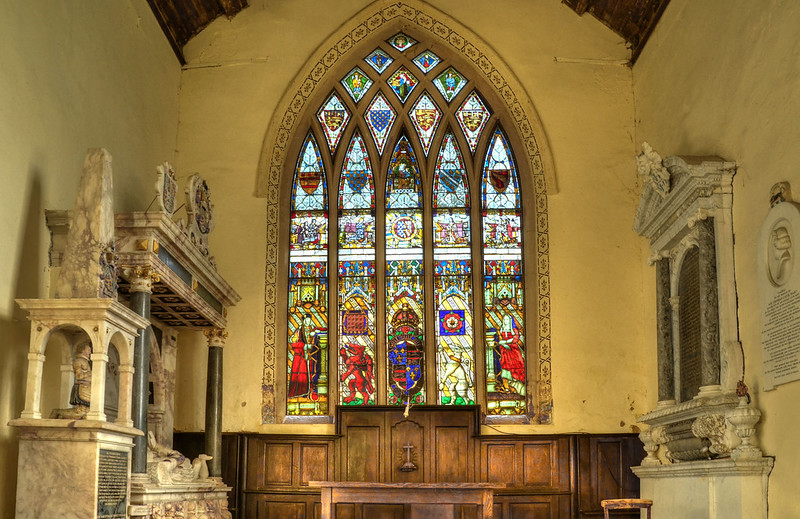 Stanford-on-Avon is in the north-west of Northamptonshire, near the Leicestershire border. Although there must once have been a village here, now there is only a handful of houses less than 100 years old, the nearby Stanford Hall, and this absolutely wonderful church which Simon Jenkins (who wrote the book, "England's Thousand Best Churches") considers this to be among the top hundred. Stanford Hall is the ancestral home of the Cave family (going back to 1430), and their descendants the Brayes, and they considered this to be their church. Their splendid monuments are to be seen throughout the church, including here in the Chancel.

The tomb on the left is that of Sir Thomas Cave and his wife Eleanor St John. It is dated 1613. The adjoining cenotaph commemorates their eldest son Richard, who died in Italy in 1606, aged 19.

The East Window is very special. The top half dates back to the reign of Edward II (1307-1327). The five panels in the lower half are somewhat later and were discovered in an old chest in Stanford Hall in 1932. But they had obviously been made to fit this window. It is thought they had been removed for safety long ago, possibly when Cromwell's Puritan soldiers were rampaging through the country after the English Civil War, destroying ornamentation in churches, including stained glass windows.

The plain altar table was used by William Laud who came to Stanford as vicar in 1607. He rose to become Archbishop of Canterbury.