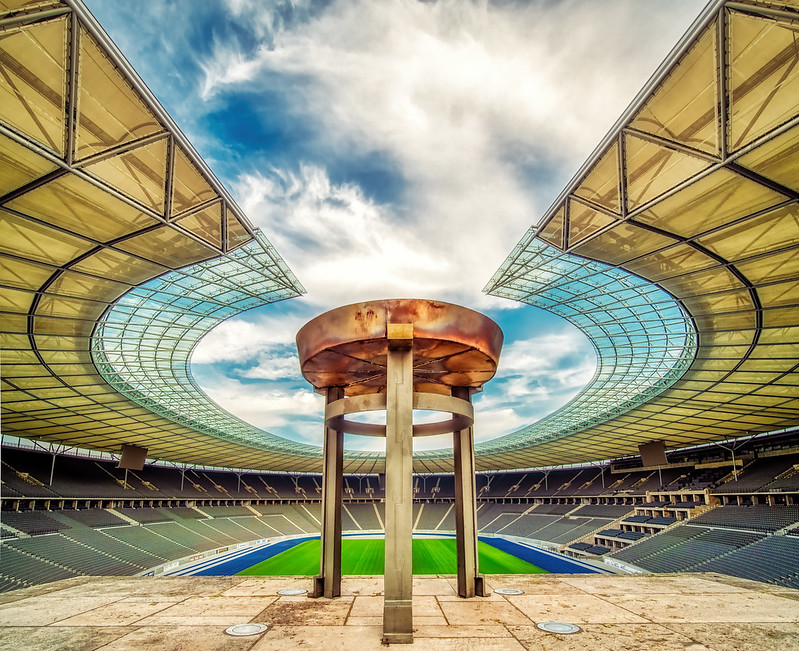 This is the second capture from my recent photowalk at the Olympic stadium in Berlin (for the first image please check my previous upload). It was the first (!!!) proper photowalk in this strange year (the cube berlin in July was more like a short, casual stroll, we were there for just an hour), and the Olympic stadium is ideal for a worry-free, relaxed visit, because that place is huge – well, that's what Olympic stadiums are, aren't they? –, so keeping a safety distance to the other (very few) visitors was super easy. And what was in my bag: the EM5II with the Laowa C-Dreamer 7.5mm F/2 ultrawide angle lens and the M.Zuiko 12-40 F/2.8 Pro Zoom (but I'd used the Laowa for most captures, because in a place like this it almost always can't be wide enough), and, of course, the Ricoh GRIII. The light situation inside the Olympic stadium isn't that easy, so I mostly shot in exposure bracketing mode. Something I wish I'd have figured out how to do it on the Ricoh before my visit there, but I got lovely images with the GRIII as well ;-) I will post images from this visit in a loose sequence – and don't worry, I won't bore you with Olympic stadium images only for the rest of the year, there are still enough nice captures in my archive to ensure variety, and of course I also hope to be able to take more new images this year (apart from MMs) ;-)

So this is a handheld HDR image made from three different exposures. Sharpened in Topaz Sharpen AI (mode "Sharpen"), further HDRified in Aurora HDR and finally LUTified ("Keen") in ON1 for a lighter, more colourful and somewhat breezier look, because just when I took images in that part of the Olympic stadium (at the Marathon Gate) the sun decided to hide behind the beautiful clouds we've had on that day, so the original HDR was a little on the dark side. In ON1 I've also added some detail to the Olympic cauldron – which is the original from the Olympic summer games in 1936.