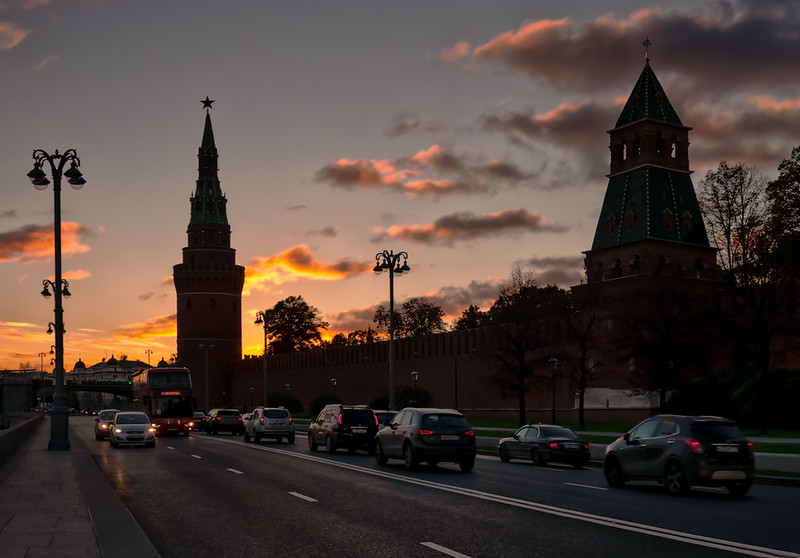 A road with cars at the walls of the Moscow Kremlin at sunset.
The Kremlin embankment runs along the southern wall of the Kremlin along the left bank of the Moskva River, between Bolshoy Kamenny and Bolshoy Moskvoretsky bridges. The first stone embankment in Moscow, the Kremlin Embankment dates back to the late 15th century. At the beginning of the 18th century, earthen ramparts and bastions were erected on the banks of the river - defensive structures to repel an impending (but failed) attack by the Swedes.
Another restructuring of the Kremlin embankment took place in the 1790s. Designed by the famous Moscow architect M.F. Kazakov's embankment was cleared of buildings, a through passage was arranged along it, and the bank was reinforced with stones and planted with trees.
The historical site acquired its modern look in 1936. The support of the embankment wall was made at an angle and faced with granite. Linden trees were planted between the carriageway of the embankment and the southern wall of the Kremlin.
The photo shows two towers out of twenty.
Annunciation tower - the year when the construction was carried out has not yet been established. The approximate date can be called 1488. It is named after the sacred icon "Annunciation". For many years she decorated the walls of the tower and protected the soldiers during the battle.
Vodovzvodnaya Tower - so named because it was the first to be equipped with a water supply system. Previously it was called the Sway Tower, because the famous boyars Sviblovs lived nearby. The construction was carried out by a talented architect of that time, Anton Fryazin-novy. Since 1937, the tower has been decorated with a ruby ​​star.