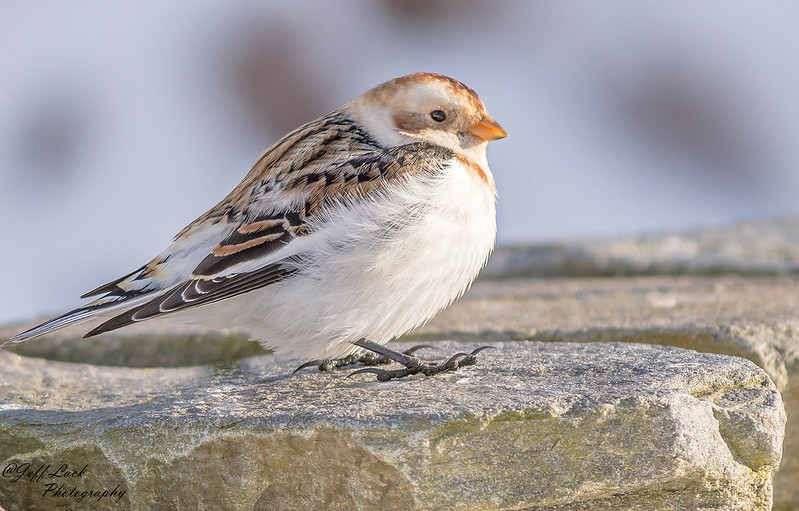 Snow buntings are large buntings, with striking 'snowy' plumages. Males in summer have all white heads and underparts contrasting with a black mantle and wing tips. Females are a more mottled above. In autumn and winter birds develop a sandy/buff wash to their plumage and males have more mottled upperparts.

Globally, they breed around the arctic from Scandinavia to Alaska, Canada and Greenland and migrate south in winter. They are a scarce breeding species in the UK, in Scotland, making them an Amber List species. They are more widespread in winter in the north and east when residents are joined by continental birds.

They are listed under Schedule 1 of the Wildlife & Countryside Act.

The snow bunting lives in very high latitudes in the Arctic tundra. There is no apparent limit to its northern range, while the southern range is limited by the duration of daylight, which influences their reproductive activity. This species is found in the high Arctic tundra of North America, Ellesmere Island, Iceland, higher mountains of Scotland, Norway, Russia, North Greenland, Siberia, Novaya Zemlya, and Franz Josef Land. During the winter, this bird migrates to the circumglobal northern temperate zone including the south of Canada, north of the United States, north of Germany, Poland, Ukraine, and east to central Asia. During the last ice age, the snow bunting was widespread throughout continental Europe.

During the breeding period the snow bunting looks for rocky habitats in the Arctic Since the vegetation in the tundra is low growing, this bird and its nestlings are exposed to predators, and in order to ensure the survival of its offspring, the snow bunting nests in cavities in order to protect the nestlings from any threat. During this period, buntings also look for a habitat rich in vegetation such as wet sedge meadows and areas rich in dryas and lichens. In the winter, they look for open habitats such as farms and fields where they feed on seeds in the ground.