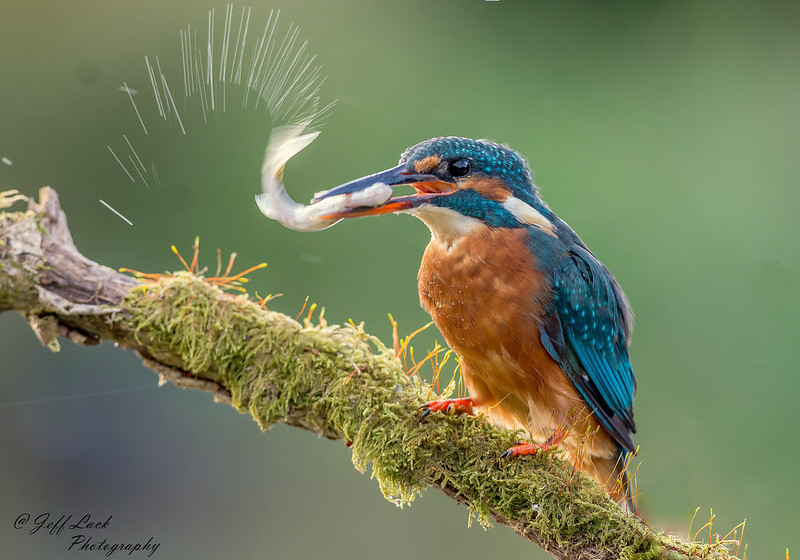 
The common kingfisher (Alcedo atthis) also known as the Eurasian kingfisher, and river kingfisher, is a small kingfisher with seven subspecies recognized within its wide distribution across Eurasia and North Africa. It is resident in much of its range, but migrates from areas where rivers freeze in winter.

This sparrow-sized bird has the typical short-tailed, large-headed kingfisher profile; it has blue upperparts, orange underparts and a long bill. It feeds mainly on fish, caught by diving, and has special visual adaptations to enable it to see prey under water. The glossy white eggs are laid in a nest at the end of a burrow in a riverbank.

The female is identical in appearance to the male except that her lower mandible is orange-red with a black tip. The juvenile is similar to the adult, but with duller and greener upperparts and paler underparts. Its bill is black, and the legs are also initially black. Feathers are moulted gradually between July and November with the main flight feathers taking 90–100 days to moult and regrow. Some that moult late may suspend their moult during cold winter weather.

The flight of the kingfisher is fast, direct and usually low over water. The short rounded wings whirr rapidly, and a bird flying away shows an electric-blue "flash" down its back.

The common kingfisher is widely distributed over Europe, Asia, and North Africa, mainly south of 60°N. It is a common breeding species over much of its vast Eurasian range, but in North Africa it is mainly a winter visitor, although it is a scarce breeding resident in coastal Morocco and Tunisia. In temperate regions, this kingfisher inhabits clear, slow-flowing streams and rivers, and lakes with well-vegetated banks. It frequents scrubs and bushes with overhanging branches close to shallow open water in which it hunts. In winter it is more coastal, often feeding in estuaries or harbours and along rocky seashores. Tropical populations are found by slow-flowing rivers, in mangrove creeks and in swamps.

Like all kingfishers, the common kingfisher is highly territorial; since it must eat around 60% of its body weight each day, it is essential to have control of a suitable stretch of river. It is solitary for most of the year, roosting alone in heavy cover. If another kingfisher enters its territory, both birds display from perches, and fights may occur, in which a bird will grab the other's beak and try to hold it under water. Pairs form in the autumn but each bird retains a separate territory, generally at least 1 km (0.62 mi) long, but up to 3.5 km (2.2 mi) and territories are not merged until the spring.

Very few birds live longer than one breeding season. The oldest bird on record was 21 years.

They are also listed as a Schedule 1 species under the Wildlife and Countryside Act offering them additional protection.