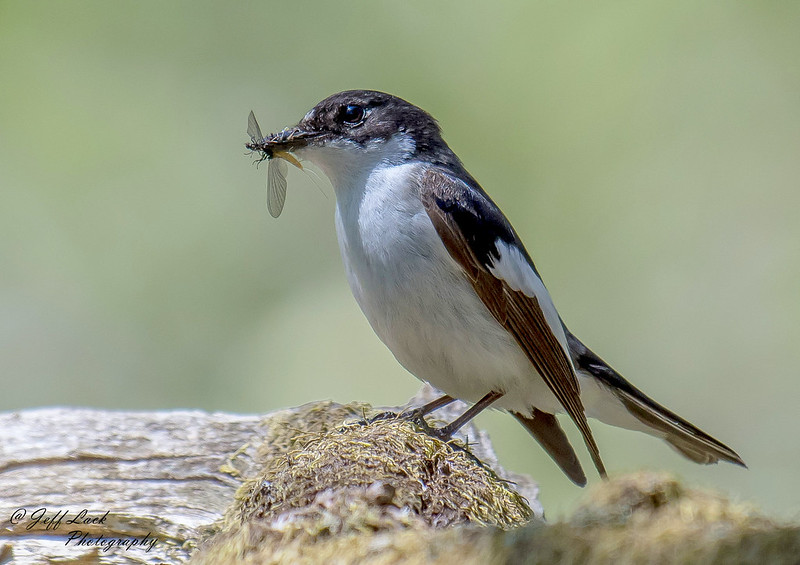 
The European pied flycatcher (Ficedula hypoleuca) is a small passerine bird in the Old World flycatcher family. One of the four species of Western Palearctic black-and-white flycatchers, it hybridizes to a limited extent with the collared flycatcher. It breeds in most of Europe and western Asia.
It is migratory, wintering mainly in tropical Africa.
It usually builds its nests in holes on oak trees. This species practices polygyny, usually bigamy, with the male travelling large distances to acquire a second mate. The male will mate with the secondary female and then return to the primary female in order to help with aspects of child rearing, such as feeding.

The European pied flycatcher is mainly insectivorous, although its diet also includes other arthropods. This species commonly feeds on spiders, ants, bees and similar prey.

The European pied flycatcher predominately practices a mixed mating system of monogamy and polygyny. Their mating system has also been described as successive polygyny. Within the latter system, the males leave their home territory once their primary mates lays their first eggs. Males then create a second territory, presumably in order to attract a secondary female to breed. Even when they succeed at acquiring a second mate, the males typically return to the first female to exclusively provide for her and her offspring.
Males will sometimes care for both mates if the nests of the primary and secondary female are close together. The male may also care for both mates once the offspring of the primary female have fledged. The male bird usually does not exceed two mates, practicing bigamy. Only two cases of trigyny had been observed.