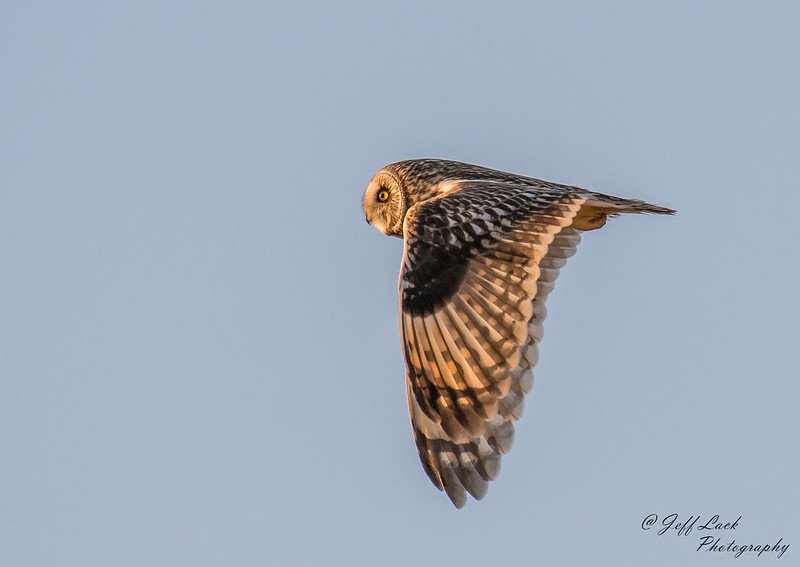 The short-eared owl occurs on all continents except Antarctica and Australia; thus it has one of the most widespread distributions of any bird. A. flammeus breeds in Europe, Asia, North and South America, the Caribbean, Hawaii and the Galápagos Islands. It is partially migratory, moving south in winter from the northern parts of its range. The short-eared owl is known to relocate to areas of higher rodent populations. It will also wander nomadically in search of better food supplies during years when vole populations are low.

Hunting occurs mostly at night, but this owl is known to be diurnal and crepuscular as well. Its daylight hunting seems to coincide with the high-activity periods of voles, its preferred prey. It tends to fly only feet above the ground in open fields and grasslands until swooping down upon its prey feet-first. Several owls may hunt over the same open area. Its food consists mainly of rodents, especially voles, but it will eat other small mammals such as mice, ground squirrels, shrews, rats, bats, muskrats and moles. It will also occasionally predate smaller birds, especially when near sea-coasts and adjacent wetlands at which time they attack shorebirds, terns and small gulls and seabirds with semi-regularity. Avian prey is more infrequently preyed on inland and centers on passerines such as larks, icterids, starlings, tyrant flycatchers and pipits.