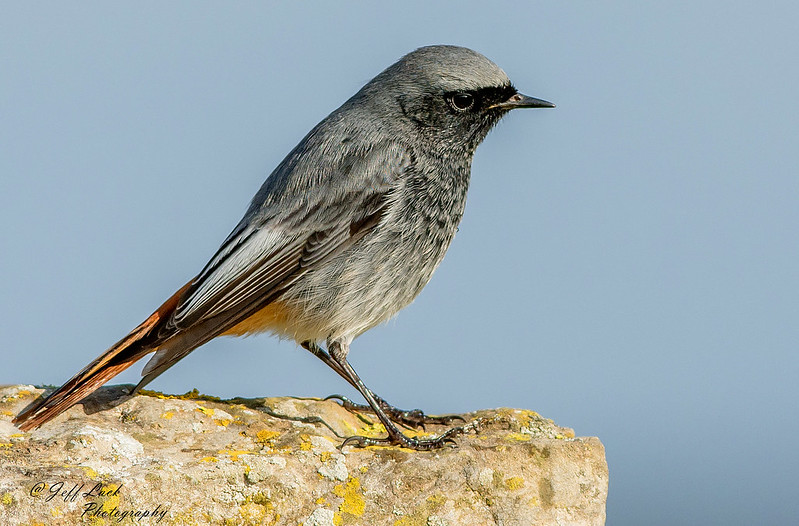 
The black redstart (Phoenicurus ochruros) is a small passerine bird in the redstart genus Phoenicurus. Like its relatives, it was formerly classed as a member of the thrush family (Turdidae), but is now known to be an Old World flycatcher (Muscicapidae). Other common names are Tithy's redstart, blackstart and black redtail.

It is not very closely related to the common redstart. As these are separated by different behaviour and ecological requirements.

It is a widespread breeder in south and central Europe and Asia and northwest Africa, from Great Britain and Ireland (where local) south to Morocco, east to central China. It is resident in the milder parts of its range, but northeastern birds migrate to winter in southern and western Europe and Asia, and north Africa. It nests in crevices or holes in buildings.

In Britain, it is most common as a passage and winter visitor, with only 20–50 pairs breeding.

On passage it is fairly common on the east and south coasts, and in winter on the coasts of Wales and western and southern England, with a few also at inland sites. Migrant black redstarts arrive in Britain in October or November and either move on or remain to winter, returning eastward in March or April. They also winter on the south and east coasts of Ireland.

The species originally inhabited stony ground in mountains, particularly cliffs, but since about 1900 has expanded to include similar urban habitats including bombed areas during and after World War II, and large industrial complexes that have the bare areas and cliff-like buildings it favours; in Great Britain, most of the small breeding population nests in such industrial areas.