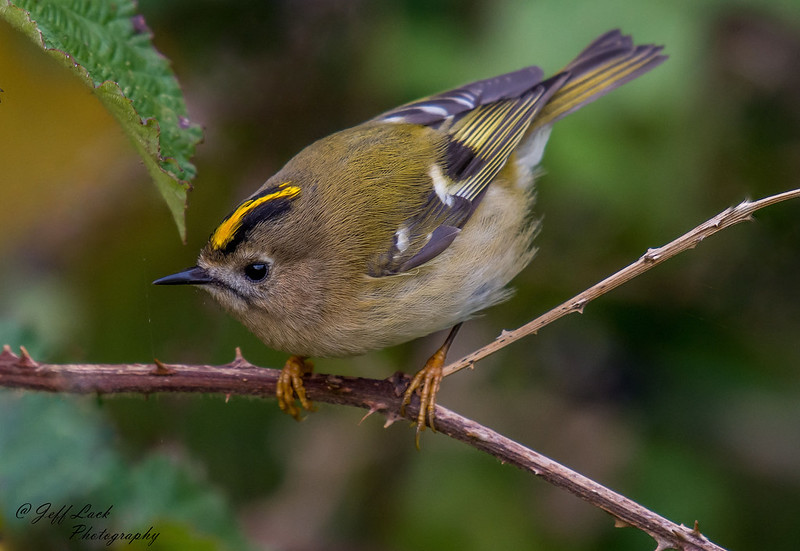 The goldcrest (Regulus regulus) is a very small passerine bird in the kinglet family. Its colourful golden crest feathers gives rise to its English and scientific names, and possibly to it being called the king of the birds in European folklore. Several subspecies are recognised across the very large distribution range that includes much of Eurasia and the islands of Macaronesia. Birds from the north and east of its breeding range migrate to winter further south.
The goldcrest is the smallest European bird, 8.5–9.5 cm (3.3–3.7 in) in length,[2] with a 13.5–15.5 cm (5.3–6.1 in) wingspan and a weight of 4.5–7.0 g (0.16–0.25 oz).

Several small passerine species survive freezing winter nights by inducing a lower metabolic rate and hypothermia, of a maximum of 10 °C (18 °F) below normal body temperature, in order to reduce energy consumption overnight. However, in freezing conditions, it may be that for very small birds, including the tiny goldcrest, the energy economies of induced hypothermia may be insufficient to counterbalance the negative effects of hypothermia including the energy required to raise body temperature back to normal at dawn. Observations of five well-fed birds suggest that they maintain normal body temperatures during cold nights by metabolising fat laid down during the day, and that they actually use behavioural thermoregulation strategies, such as collective roosting in dense foliage or snow holes to survive winter nights. Two birds roosting together reduce their heat loss by a quarter, and three birds by a third. During an 18‑hour winter night, with temperatures as low as −25 °C (−13 °F) in the north of its range, goldcrests huddled together can each burn off fat equivalent to 20% of body weight to keep warm.

Until the severe winter of 1916–17 the Goldcrest was abundant and widespread, nesting in all the wooded portions of our islands; in 1920 it could have little more than an obituary notice, for the nesting stock was practically wiped out. ... and for some years, even as a winter visitor, the Goldcrest remained rare, absent from most of its nesting haunts. It is, however, now fully re-established.

Conversely, populations can expand rapidly after a series of mild winters. In lowland Britain, there was an increase of 48% following the 1970/71 winter, with many pairs spreading into deciduous woodlands where they would not normally breed.

In culture
Aristotle (384–322 BC) and Pliny (23–79 AD) both wrote about the legend of a contest among the birds to see who should be their king, the title to be awarded to the one that could fly highest. Initially, it looked as though the eagle would win easily, but as he began to tire, a small bird that had hidden under the eagle's tail feathers emerged to fly even higher and claimed the title. Following from this legend, in much European folklore the wren has been described as the king of the birds or as a flame bearer. However, these terms were also applied to the Regulus species, the fiery crowns of the goldcrest and firecrest making them more likely to be the original bearers of these titles, and, because of the legend's reference to the smallest of birds becoming king, the title was probably transferred to the equally tiny wren. The confusion was probably compounded by the similarity and consequent interchangeability of the Greek words for the wren (βασιλεύς basileus, and the crests (βασιλισκος basiliskos, In English, the association between the goldcrest and Eurasian wren may have been reinforced by the kinglet's old name of gold-crested wren.

This tiny woodland bird has had little other impact on literature, although it is the subject of Charles Tennyson Turner's short poem, The Gold-crested Wren first published in 1868. An old English name for the goldcrest is the woodcock pilot, since migrating birds preceded the arrival of Eurasian woodcocks by a couple of days. There are unfounded legends that the goldcrest would hitch a ride in the feathers of the larger bird, and similar stories claimed that owls provided the transport. Suffolk fishermen called this bird herring spink or tot o'er seas because migrating goldcrests often landed on the rigging of herring boats out in the North Sea.