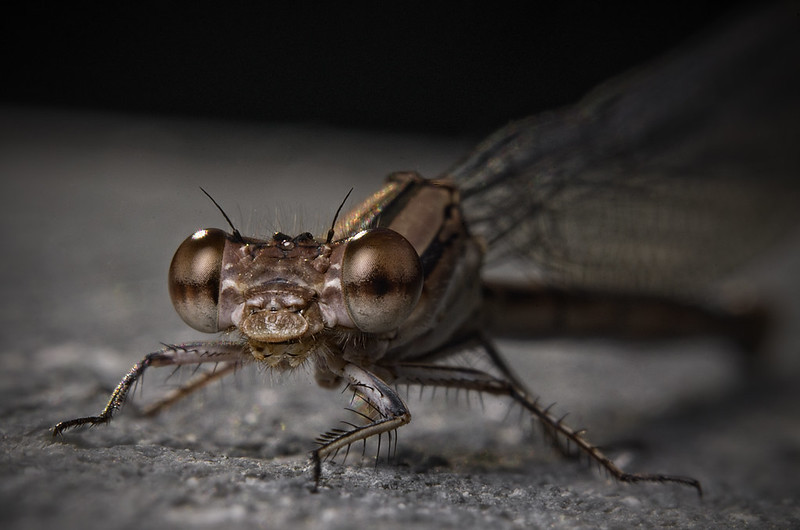 This guy was really little. He was a little uptight as well. Every now and then he got up as though he was ready to fly away.

Actually, think this is a damselfly.


What is a photo without learning a little about what you are looking at?


How long do they live?
Most temperate-zone species live as adults less than a month, though some species can live as long as six months.


How can I tell a dragonfly from a damselfly?
Damselflies are usually slim, their forewings and hindwings narrow at the base and have similar shapes, and their eyes are widely separated. Most species hold their wings above the abdomen when they are resting. Dragonflies are larger. Their eyes touch near the top of their head. The wings do not narrow at the base; the forewings and hindwings differ in shape. When they are resting, the wings are usually spread.


What are the biggest dragonfly and damselfly?
The Megaloprepus coerulatus damselfly of Central America has a wingspan up to 19 cm. The bulkiest known dragonfly is Petalura ingentissima from Australia, with a wingspan up to 16 cm. Extinct fossil dragonflies with wingspans up to 70-75 cm have been identified.


It is estimated that the top speed for a dragonfly is between 30 and 60 km/h (19 to 38 m.p.h.). The maximum fspeed varies a lot between different species, with bigger dragonflies generally flying faster than smaller ones.


How long have dragonflies been around?
About 300 million years. Huge dragonflies were flying when dinosaurs roamed the earth.


Do dragonflies bite or sting?
No, although large dragonflies will sometimes try to bite, but they fail to break the skin.


What do dragonflies eat?
Adult dragonflies mostly eat other flying insects, particularly midges and mosquitoes. They also will take butterflies, moths and smaller dragonflies. The larvae, which live in water, eat almost any living thing smaller than themselves. Larger dragonfly larvae sometimes eat small fish or fry. Usually they eat bloodworms or other aquatic insect larvae."