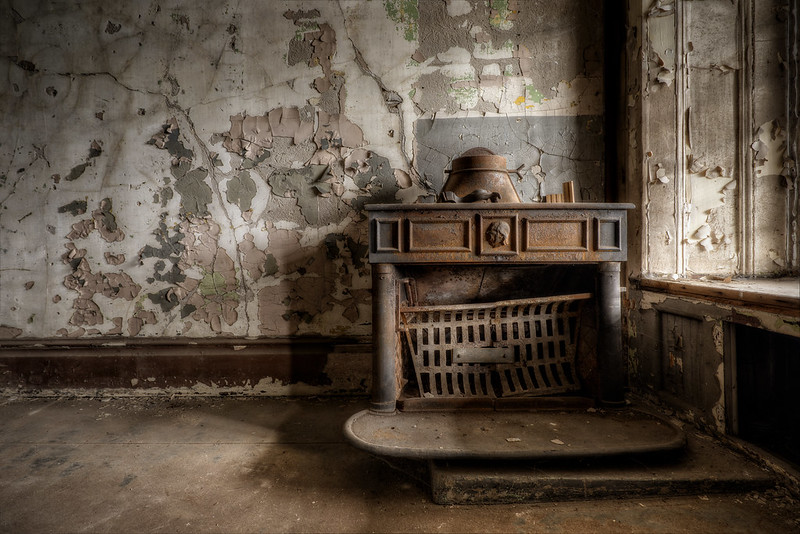 I found this little gem inside the Mail Room of the historic West Virginia Penitentiary. Didn't know the history behind it until I looked it up and this type of fireplace has an interesting history tied to one of the USA's founding fathers, Benjamin Franklin﻿.

Among the educated and enlightened men of 18th-century America, none was more influential or gifted than Benjamin Franklin. He had few peers who could match his intellect and versatility as author, scientist, inventor, printer, philosopher, and popular moralizer. Being essentially a provincial American, Franklin's mind turned on practical matters, including the problem of how to heat a room evenly and inexpensively. From these musings came his remarkable Franklin Stoves, the first of which were manufactured in 1744 by Franklin's friend Robert Grace.

They were originally called "Pennsylvania Fire-Places," and Franklin himself wrote the first advertisement to publicize the stove, in which he claimed, "If you sit near the Fire, you have not that cold Draught of uncomfortable Air nipping your Back and Heels, as when before common Fires...being scorcht before, and, as it were, froze behind."

Franklin's stove was essentially a free-standing iron fireplace. It contained an air box below the hearth into which fresh, cold air was drawn by the heat of the fire over the box. Behind the fire stood an air column - actually an extension of the air box - the whole unit being L-shaped. At the top of the air column, the fresh air, now warmed by the fire, was allowed to escape back into the room; but the smoke was forced over, around, down, then up and out through the chimney. In short, the fire heated a separate volume of air from that which was mixed with smoke from the fire - an ingenious recycling system that constantly forced warm air down from above and back into the room where it was needed. According to Franklin, this method was healthier than warm air produced by common fireplaces "by which many catch cold, whence proceed Coughs, Catarrhs, Toothache, Fevers, Pleurisies, and many other Diseases."

Franklin also claimed his product was more efficient than other stoves and fireplaces because it burned less wood, a great advantage indeed for those who lived where wood was in short supply. Since Franklin lived in Philadelphia, Pennsylvania, not far from one of the world's great coal regions, one can only be amused by his statement in 1744 that, by the use of his Pennsylvania Fire-Place, " . . . our Wood may grow as fast as we consume it, and our Posterity may warm themselves at a moderate Rate, without being oblig'd to fetch their Fuel over the Atlantick..."