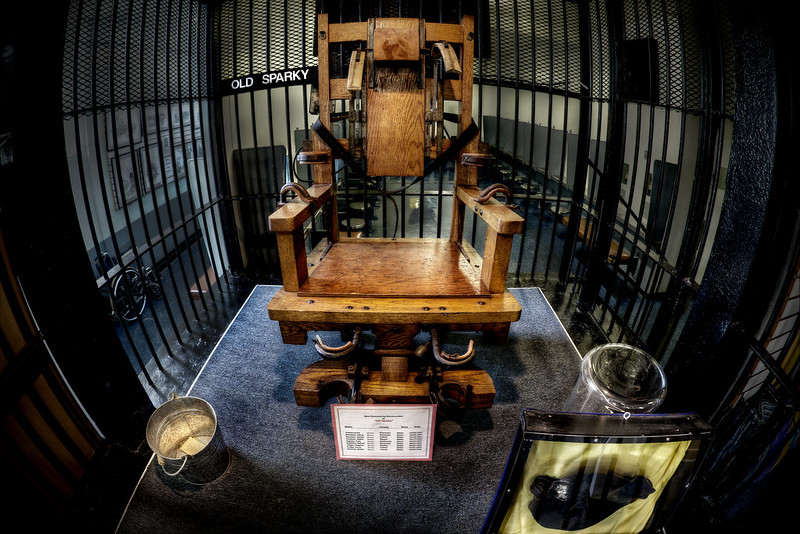 Built by an inmate to execute inmates...

Some info on this historic seat:

On top of the murders that occurred at this penitentiary, numerous official executions were carried out at the prison from 1899 to 1959. The majority of the executions were by way of the hangman’s noose. Eighty six condemned men met their maker that way. The remaining nine convicts died at the hands of 'Old Sparky', the prison’s aptly named electric chair. Coincidentally 'Old Sparky' was built by one of the prison’s inmates as well Up until 1931, executions at the prison were open for public viewing, of which some were just a little too gruesome for most folks to watch.

"The now-decommissioned electric chair known as 'Old Sparky' at the now-closed West Virginia State Penitentiary in Moundsville, West Virginia was installed in a facility originally used for hanging. It was in use from 1951 until 1959, during which time nine condemned prisoners were executed in the chair. The chair was bolted to a low platform which covered what had previously been the trapdoor of the gallows used in the state's judicial hangings. Its control apparatus was designed in such a way that three push-button switches were to be simultaneously pressed by three members of the execution team; only one of these switches actually completed the circuit, allowing each member of the execution team to reassure himself that perhaps he had not been the one who had actually initiated the death of the condemned."