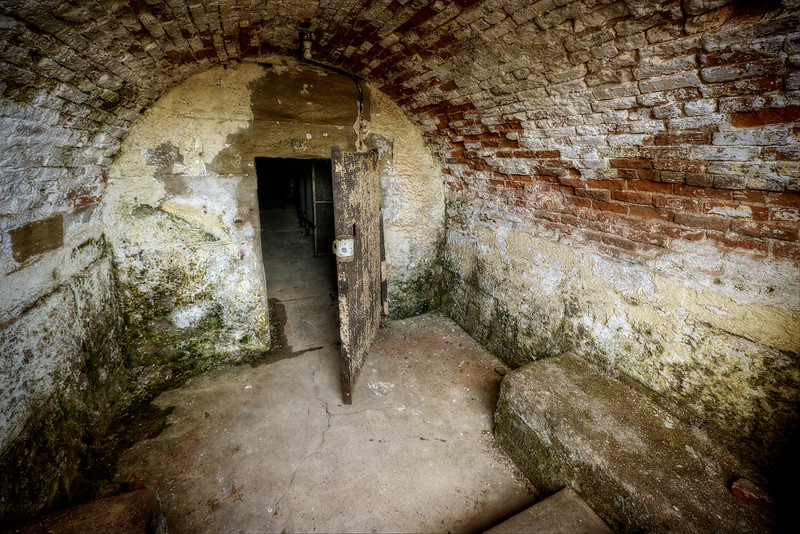 "The entrance to the basement where one of Moundsville's oldest ghost still haunts 80 years after his death.

Another former inmate is quite famous and still sticks around the prison. Only problem is he’s not alive, he’s very much dead. His name is R.D. Wall and he was killed in the bowls of the prison. While alive, he worked in the boiler room, keeping the boilers fired up and going, and also did some work in the tool room. Problem for Wall though was that he was known as a snitch. As we found out earlier in the article Moundsville inmates didn’t take too kindly to those types. They cut off their fingers with dull shivs and then they severed his head completely off. Wall died, but some say he’s still working the boilers and sometimes takes a casual stroll outside. He’s also reported to be connected to the first ghost sighting. In the 1930’s, the guards would spot an inmate walking outside by the wall at the maintenance area. The guards would sound the alarm that a prisoner was trying to escape, but when the guards got to where they saw the inmate, no one was there, and none of the inmates were missing from inside. His face has been spotted in the area where he got killed, just his face, and no body."

The history of this historic penitentiary:

"The prison at Joliet provided the prototype for the West Virginia Penitentiary. It was an imposing stone structure fashioned in the castellated Gothic architectural style (adorned with turrets and battlements, like a castle). Only the dimensions of West Virginia's facility would differ; it would be approximately one-half the size of Joliet.

No architectural drawings of the West Virginia Penitentiary have been discovered, so an understanding of the plan developed by the Board of Directors must be obtained through their 1867 report, which details the procurement of a title for ten acres of land and a proposal to enclose about seven acres. On the north side would be a street 60 feet in width, and on the west 140 feet for street and yard to the front buildings.

The prison yard would be a parallelogram 682 1/2 feet in length, by 352 1/2 feet in width, enclosed by a stone wall 5 feet in thickness at the bottom, 2 1/2 feet at the top, with foundation 5 feet below the surface, and wall 25 inches thick. At each of the corners of this wall would be large turrets, for the use of the guards, with inside staircases. Guardrooms would be above on a level with the top of the main. The superintendent's house and cell buildings would be so placed that the rear wall of each would form part of the west wall. "